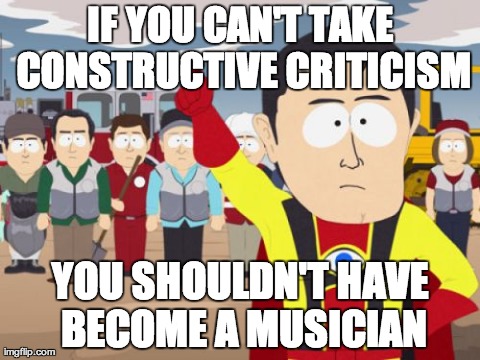 This post might piss off some musicians out there but it needs to be said. If you’re one of those bands who are like, “WWAAaaaaaahhh, stop writing about my band. I don’t like it” or “Stop Criticizing the music scene” then you guys shouldn’t have become a musician in the first place.

If you’re going to whine and cry about online criticism toward yourself or your band and blah blah blah… you get the deal… then you don’t have what it takes to play music professionally.

Like I said before, wait until you get your first negative review from an online music site or where ever. Not everybody is going to write positive stuff about your band. That’s the name of the game in the music business. If you’re gonna get easily offended  at a little bit of honesty, then you should retire. Quit what you’re doing.

So if you get offended at some of the stuff I say on here just wait until some of the critics  at different music sites write about you out there. I’m sure you bands out there google yourself everyday to see if people write stuff about you. When you google yourself and you discover a blog site or a music critic site and if you get an album review or a concert review that is not so kind, don’t be surprised. Seriously, there are tons of music sites out there that are pretty honest toward unsigned talent. You’re gonna get a few bad reviews ripping the hell out of your band… whether you like it or not.

I just wanted to say that musicians starting their own blogs or venting in facebook to lash out at the critics is not the way to go. It’s just unprofessional for musicians to respond to critics. I have seen bands respond to nasty reviews before and really it makes the band look bad when they do that. I know it’s bad that bands sometimes get bad reviews but it happens. Responding to critics in a harsh and nasty way, bashing the writer is not gonna make things better.

When you see some online criticism toward your band best thing to do is ignore it and let it go. Take it as a compliment and be flattered anyway.

I mean, if you respond to everything negative being written about you online… think how that’s gonna make you look. It’ll make you look arrogant and egotistical. I know you expect everyone to be positive about your band but it’s never gonna happen. If you keep replying to negative criticism or negative reviews… then your career isn’t gonna last long.

When bands respond to critics, it makes them look extremely childish. Bands retaliating against their critics is not the way to go.

Most successful bands get negative criticism all the time. They just don’t reply to any of it. I can sit here and say Phantogram sucks ’cause I think they do suck. It’s my opinion and I have the right to it.

Go ahead. Keep responding to the bloggers and critics out there when they decide to write nasty stuff about your band. You’ll be keeping your fingers busy.