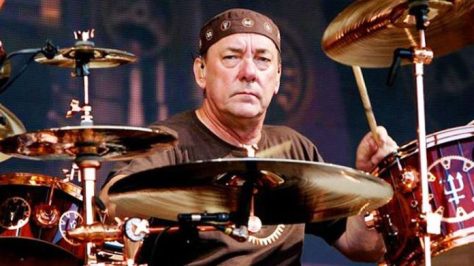 Well, here is your first musical passing of 2020… very sad news that Rolling Stone exclusively revealed the news that the long time drummer and one of the founders of Rush, Neil Peart just died. It was just found out that Neil has been battling brain cancer for 3 or 4 years before his passing.

Neil was more than a drummer, though. He was also a book author and an avid biker (aka motorcyclist). Neil wrote a few books writing mostly about his motorcycling adventures and he was also the prime lyricist of Rush. He wrote the lyrics to pretty much all Rush songs as he was responsible to writing lyrics for Rush’s biggest hits especially songs like “Tom Sawyer”, “Limelight”, “Subdivisions”, “Closer to the Heart”, “Fly By Night”, etc.

Now you  know why the band Rush has stopped playing music for the past couple of years. I remember a couple of years ago Geddy Lee says Rush had no plans of getting together to record a new album and go on tour but never said anything about Neil battling brain cancer. Probably out of respect for privacy? Well, Neil has always been a very private man and Geddy and Alex always respected his privacy.

The band did the smart thing stopping when they couldn’t do it anymore. When Neil was battling brain cancer before he died, he could no longer play the drums which forced the band to stop. Rush refused to continue on without Neil ’cause it’s not Rush without Neil. That Rush sound can’t be done without Neil ’cause Neil’s drumming style was what made Rush to begin with. Now that Neil Peart is gone then that probably means Rush is done for good. I think Geddy and Alex will soon put out a statement to announce an official breakup ’cause they can’t go on without him. Rush is probably done.

So that probably means “Clockwork Angels” will be the band’s final album? Probably… unless the band recorded new music before Neil got diagnosed with brain cancer but I doubt it, though. I’m sure the band will dig up some unreleased music from the vault someday as I’m sure they got plenty of unreleased music stored away. We’ll have to wait and see.

I’m a huge Rush fan. Always has been so this one hurts. I had the opportunity to see Rush live in concert myself at SPAC and I remember Neil doing a long drum solo that night. It was insane, I’ll never forget it. Neil was a pretty unique drummer… he knew how to make his drums sound musical which other drummers never knew how to do.

This is probably gonna be the end of Rush for good and I want to thank them for the great music over the years. They were one-talented band. Loved them so much.