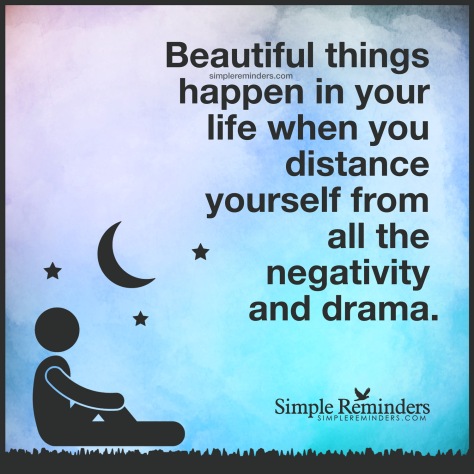 In facebook, I’m always seeing all kinds of negativity and drama. You see it everyday. Men and women ranting about how tough life is publicly on their FB walls. I’m sure you’ve seen it too. When men and women get crap by people in their lives, they would also rant about that publicly as well. Ya know something, I don’t know why people get themselves into so much drama. They claim they don’t like it but I think they do… people really love drama and addicted to it.

Not me. I would pretty much rather stay far away from it as much as possible. Some may not think it but I’m a very happy guy right now. My life isn’t perfect but I found ways to be happy. One way to make you happy is distancing yourself from negativity and drama. It really works. I used to have a problem getting myself into negativity and drama — all that did was make me unhappy most of the time. You’ll be much happier if you stay out of all drama and bullshit, always. Whether the drama and negativity has something to do with you or not, you should stay out of it either way.

Ya know, if you’re getting attacked and criticized by people… just ignore it and move on. If people around you are getting themselves into drama and if it doesn’t concern you at all then don’t get yourself involved. I see drama everywhere, not just in social networking, in real life too. I’m sure you’ve seen all kinds of drama between your family members and friends, but when you see that stuff, stay out of it. Once again, don’t get yourself involved. I never understood why people get themselves involved in other peoples drama when they shouldn’t.

When you’re getting attacked, bullied and criticized by people aka “haters”… there are gonna be some other people who think you instigated it and thinks it’s your fault. It’s not your fault at all; it’s just that a lot of people are assholes out there and that’s it. Ya know,  just because someone has a lot of haters like myself doesn’t necessarily make them a bad person. Never judge the book by it’s cover.

Yeah, I hear ya about drama & negativity in life ’cause I get a lot of it too… I’ve just gotten much better distancing myself from it. I don’t care about drama and negativity anymore like I used to. Nowadays, all I wanna be is a positive and happy person. I found myself to be a happy person by playing music, doing bodybuilding/fitness, yoga and doing all the hobbies that I like to do. I have a lot of other hobbies such as reading books, writing, watching movies and playing video games. I do a lot of hobbies ’cause that stuff keeps me happy and continues to make me feel strong. I gotta do things to be inspired.

The secret to distancing yourself from negativity is not caring about other people. Just don’t care what people think and just be yourself. Don’t change for anyone just because someone doesn’t like who you are. People always tried to change me just because they don’t like who I am and it’s not happening.

I know it’s hard to stay away from negativity and drama ’cause it’s everywhere you look, but you gotta learn to stay strong and not be a sensitive person. Yeah, a lot of people are assholes out there nowadays, but when you call people out for it… no one will believe you and they’ll keep getting on to you even more that’s why you gotta distance yourself from bullshit.

If people are being negative to you all the time then don’t be afraid to eliminate them from your life completely. I’m noticing a lot of people are having a hard time doing that. It’s not that hard really and does make your life much easier! People have no reason to get on to you about stupid shit, they’re just assholes and a bunch of low lives trying to put you down to their level. That is all.

Yeah, I still get assholes out there thinking it’s okay to say whatever they want about me but I just ignore ’em. Whenever I say I have haters, some never want to believe me but that’s okay. I don’t let negative people bother me anymore. My life is real good. I love making music and doing all the bodybuilding/fitness/yoga… that’s all I care about pretty much. I don’t care what people have to say or think about me anymore and you should have that same attitude. Just live life the way you want to and screw the rest.