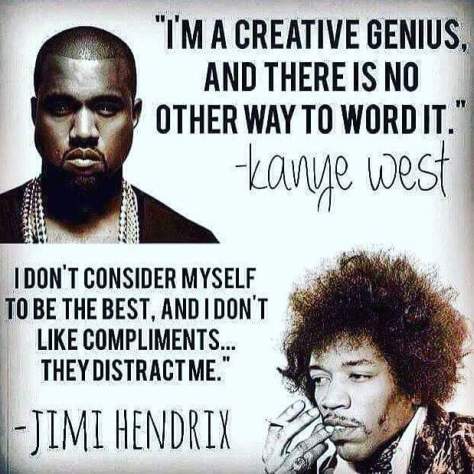 Both of these quotes by these two artists are real. They really said them during media interviews, they said them on TV and all it takes is an easy google research to find ’em. It’s easy to figure out which one of these guys is the egomaniac and the humble musician. You can betcha Kanye is the ego one and Jimi is the humble one.

Jimi never really liked to be called a guitar god or a virtuoso. When people tell him that he is, he’ll just laugh ’em off and Jimi will just say things like, “I do what I do. Just play the guitar”. Kanye however will refer to himself as a music god or a genius or whatever.

If you want an example of how musicians and music artists are different then this meme explains it nicely.

Being an ego-maniac isn’t healthy for your music life. When you have that attitude, other musicians and even music fans will look at you with pure disdain. You’ll lose a lot of respect when people see that you can be full of yourself. Musicians with an egomaniacal attitude can be a real turn-off for some. Acting like you’re a music god, thinking that you’re better than others, etc. You get the deal.

When you have a humble attitude like Hendrix by not taking yourself so serious and just play… people will treat you with more respect and will take you more seriously as a musician. The humble musician is someone who doesn’t brag about their musicianship constantly and doesn’t brag about their success in music. The humble musician doesn’t call him/herself a genius and just allows the music to speak on its own.

I wish there are more musicians like Hendrix than there are of Kanye. There are too many Kanye-like musicians around here nowadays. Not just in the major label industry… there are ego-maniacs in local music scenes all over. Can’t stand it. I know an ego-maniac and a humble musician when I see one. Of course, I give more respect to the humble musicians than the huge egos. lol….

I know I talk about this stuff a lot, but I’m just trying to give people a reality check of how the music world really is. A lot of people think I’m dumb and don’t believe me most of the time but that’s okay. I’m not afraid to tell things how they really are and I don’t make stuff up. I’ve been at the local gigs and I’ve seen how musicians are online too. It’s crazy out there, trust me.