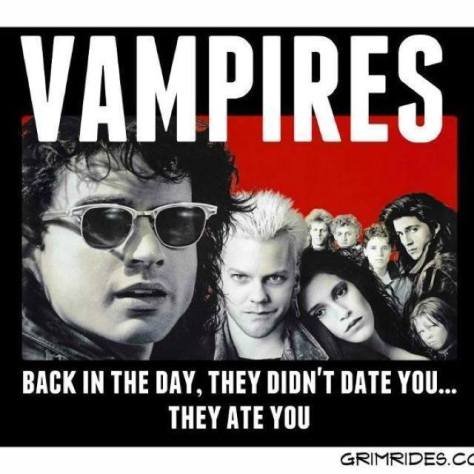 I miss the old days of Vampire films. I’m talking about the scary vampire flicks. What happened to the Vampire genre in film today is just sickening. In the old days we had vampire movies such as “The Lost Boys”, “Fright Night”, “Near Dark”, “Vamp”, “The Monster Squad” and others. In the 90’s we had vampire movies such as “Bram Stoker’s Dracula” (which was directed by Francis Ford Coppola, I’m sure you’ve seen it), “Blade”, “From Dusk ‘Til Dawn”, “Interview with the Vampire” (w/ Tom Cruise and Brad Pitt based on the Anne Rice novel), John Carpenter’s “Vampires” and many others to list.

Today, we get vampire movies like “Twilight” and “Vampire Academy”. Vampire films that are aimed for the young adult audience. I mean, really? What happened?

We need the scary vampire flicks to come back and I think it can happen. These days in horror films… slasher films and films about demonic possession are still dominating the industry. The scary vampires needs to make a comeback in horror films. Get rid of the “Twilight” and “Vampire Academy” trash and bring back the real vampire flicks. I’m a huge fan of vampires and it’s quite sickening where this genre is going these days.

I do love “The Lost Boys”, though. That’s a true vampire film right there and it’s indeed a classic! Seen the film many times.