Another reason why Obama won the re-election, is that people thought he was the lesser of the two evils. How is Romney the evil one? Google this stuff listed here and then tell me that Obama is a good guy. Do I need to give anymore evidence why Obama needs an impeachment? Lesser of the two evils? HA!!!! I re-shared this image in facebook and not many people replied. I’m sure Romney is no different, but at least he didn’t commit any crimes or murder anybody, that doesn’t make him evil, does it? I know I said I was done discussing politics for a while, but this was worth posting, so I had to. Seriously, look this stuff up. These are facts. Real stuff. Not made up rumors. I already knew some of this stuff listed here but the rest are new to me, so I had to look some of this stuff up myself. 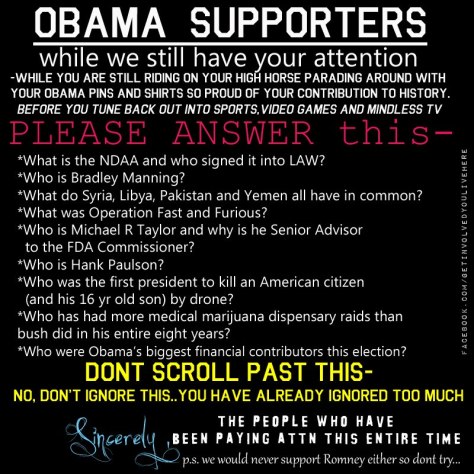 26 thoughts on “Please wake up America, Obama should not be President…”