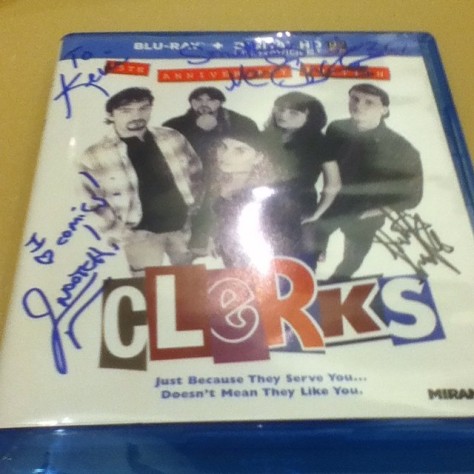 As you can see in the pics, I just met Jason Mewes who is most famous for Jay and Silent Bob. I’m a huge fan of Kevin Smith movies and the Jay and Silent Bob duo. I’ve seen all Jay and Silent Bob movies but my favorites are “Clerks” and “Jay and Silent Bob Strikes Back”. I told Jay that and he said thanks. Jay was such a cool dude in real life as I figure he would be. Jay was talkative and approachable but he couldn’t talk long ’cause of the line. I would have talked to him longer but he looked to be in a real hurry ’cause he wanted to get the line moving. There were celebrities doing autographs/pics. Jay was obviously the most famous there so his lines would be longer. Thankfully I got to see Jay early before the long lines hit.

I bought the “Clerks” movie on BluRay and had a few of the cast in the movie sign it for me. I had Scott Schiaffo, Marilyn Ghigliotti and Jason Mewes sign it.

Ya know, the thing is that autographs/pics with the celebrities aren’t free. You gotta pay something for them whatever price they ask for. I bought the “Clerks” BluRay off of Marilyn the actress in the movie. She asked for $40 for the BluRay but didn’t ask for extra money for autograph which was nice of her. I talked to her for a bit and she was real sweet and down to earth. I think she was the only actress there who didn’t ask money for autographs/pics but she was selling stuff on her table, though. She was a super nice lady and it was great to meet her. Remember, Marilyn played Veronica. She’s that lady who breaks up with Dante toward the end of the movie.

I’ve seen “Clerks” too many times. It’s a great film.

I like Comic Con events. They’re fun, but those are the type of events where you spend a lot of money so you better make sure you have some cash on ya. lol….

Yeah, I want to get into comic book collecting as it’s a new hobby that I want to pick up. I bought some comics there earlier today. Mostly Batman, Superman, The Punisher and Wolverine since they are my favorite superheroes. I not only want to collect comics as a collector’s item, but I just want to get into them to read. Some of the superhero stories are real good and interesting. I want get into comics for the stories.

The Comic Con in Saratoga was an awesome time. Had a blast.