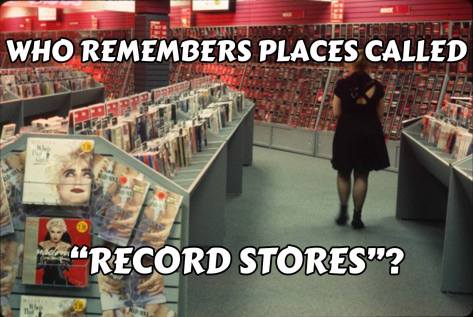 I’ve always been a huge music addict. Ever since I was a kid, I’ve always bought albums. Music was always a big part of my life and I just love supporting bands & artists. Always did and still do.

When there used to be record stores all over the place, I would go to them all the time and would browse around for hours. I never bought many cassettes and vinyls when  they were around but when the compact disc started coming out, I was all over them. I would come home with like 5 – 7 CD’s a week. That’s how I got a huge CD collection. In the past, my CD collection was a lot bigger than this but I probably sold a bunch of ’em, gave ’em away or people borrowed some and never gave them back. I still have many of my CD’s that I’ve bought over the years, though.

Thanks to Itunes, I now buy music digitally. That’s where I buy my albums now. There are still record stores around today but not as much as you have seen in the past. F.Y.E. still exists and you can still buy records at Barnes & Noble. I still buy albums on physical CD once in a blue moon. I buy a lot of albums from Itunes now since the record store era is pretty much dead.

I love listening to music. It’s always been a big part of my life and still is. I’m a proud music addict. I do miss the record store, though. Thanks to Steve Jobs who killed the record store era.