This is kind of weird and I don’t get it. I’ve been working out for 10 years or a little over. Been doing bodybuilding for a long time and now I’m doing powerlifting training too. I’ve been weightlifting for a long while now and people want to act like I’m a beginner or a newbie who doesn’t know anything about health and fitness. I’ve got a decent physique and I get compliments on how big I’m getting all the time… yet there will be some jackasses out there who will act like they’re more superior than me.

Some criticize my form even though I know I’m doing my workouts right. People just act like they’re bigger and smarter than me when it comes to conversations about weightlifting. Ya know, that’s what you’re going to get a lot. You’re definitely going to get some huge egos and narcissistic people in the weightlifting world getting all over you and act like you’re nothing.

I’m always getting people criticizing my healthy eating and my weightlifting in the gym. When things like this happen to you, please remember that health and fitness is about you. Don’t worry about what other people think or say of you… you just gotta do your thing and your thing only. You will get haters and criticizers for sure, you just gotta do your best and ignore them and I’m trying.

I’m proud of how my physique looks and I came a long way but I still got some bodyfat to drop. I’m working on that. I’ve recently made my nutrition a lot more strict and dropped my calorie intake which seems to be helping. I’ve also been doing plenty of cardio too. I should be at an estimated 14% or 15% bodyfat but I would like to drop it down between 8% – 10%, somewhere around there. Some people say that dropping down to 10% or a little lower is dangerous but not really. Doing some research about all of this, they say 6% or below is dangerous so I’ve read that 8% – 10% is pretty good if you want to be considered a real bodybuilder. Being around 8% – 10% is where you want to be if you want to be a real bodybuilder.

Whether you’re a bodybuilder or a powerlifter, you just gotta ignore everyone and do your thing. Don’t take advice from anyone unless you ask for it. If you want help from other people, you get it yourself. You don’t need to get unsolicited help from people ’cause when you get unsolicited help from others chances are, their info could be wrong so be careful. Not everyone is right when it comes to health and fitness ’cause there will be misinformed people everywhere. There are gonna be a lot of know it alls out there for sure.

Think about it, does this look like a beginner’s physique to you? This is what 10 years or over in the gym looks like. 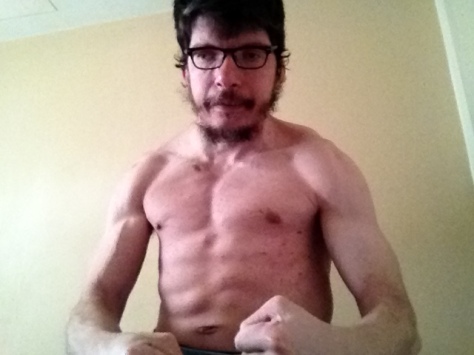 My arms are getting pretty veiny. I’m finally getting chest improvement and I have a pretty good six-pack which a lot of people struggle to get. I’m finally starting to look like a bodybuilder which was the goal I always wanted.

I’m proud of how I look there but still got some work to do like always. Still got some bodyfat to drop a little. Some even said I looked skinny still but I get people telling me how I’m looking pretty huge and jacked. People tell me all the time that I’m getting bigger and bigger.

I think the reason people criticize is that they haven’t reached their goals. Many of your critics are probably out of shape anyways and they probably want the body that you have.

Just keep going and don’t listen to people. That’s the attitude that I have had from day 1. Just ignore everyone and do my thing. Do things my own way. Yeah, there are gonna be plenty of egos in the fitness industry that will tell me to do things their way but it’s not gonna happen. I know what I’m doing and it’s hilarious how many people out there that don’t think I know what I’m doing. It’s a freakin’ joke but I’m doing good and feeling good. Life is great and I love the gym.