So you have to ask. Did the Brock watch the MTV VMA’s last night? NOPE! I did not. I just don’t care about the fucking VMA’s anymore. Everything you see on that show is fake and scripted. Even this whole Kanye vs. Taylor feud is fake and scripted. I don’t take what MTV does seriously. I stopped caring for the VMA’s a long time ago. MTV was good in the 80’s during the hair metal era and the early 90’s during the grunge metal era, but after that, MTV turned to shit. I don’t know why people still watch that fucking station. Not my thing.

So Justin Bieber turns out to be a drummer and he did a drum solo at last night’s show. Oh goody! NOT! I can think of plenty of kids that can play the drums way better than him. Look through youtube and you can see kids from 10-15 playing drums professionally and skilled.

What did I watch last night instead? I watched the Cowboys vs. Redskins game instead. That was better. It was a good game too. I wanted the Cowboys to win, but not too worry there will be plenty more Cowboys games up ahead! I’m sure they’ll do better in the future! I find myself watching sports a lot more often and I’ll probably watch a lot more football this year. I like the NFL. MLB baseball is alright, but I find football more exciting. Fuck the MTV Awards, fuck it all.

When discussing the Kanye West MTV controversy on the internet with other people, and when I bring up this, “Kanye West hasn’t been the same person since he lost his Mom”…. some people will respond back… “So what, my mother died, he has no right to be an asshole”.

While that’s true that everybody loses a parent here and there (we’re all gonna go someday)… you try to make it sound like that people find a way to move forward quickly and to get over a death in the family…but not everybody. You see, every human being is different. Every human being has different emotions and feelings.

Not everybody moves on from a death in the family so quickly. You may think you can, but the other person who lost a parent may not think so.

John Travolta still hasn’t gotten over the death of his son, Jett, he is still hurting and sad over it, perfect example. The recent pictures of John proved it.

Liam Neeson may have moved forward and still working on film since the death of his wife, Natasha, but somewhere in his private times at home, I’m sure he’s still hurting over her.

When Kanye appeared on Jay Leno and Jay asked him about his Mom, that is good enough proof that Kanye still hasn’t gotten over his Mom yet. When Kanye went out and apologized about MTV thing like three times, do you think that he was still thinking about his Mom when he was doing that?

You have a death in the family, somebody so close to you, things become different and things change in life. Don’t go around thinking, “I can move on from it”, ’cause I think that’s a lie.

I think Kanye’s personal problems in the media lately has nothing to do with him not taking any time off, I think he’s still thinking about Donda, clearly.

I can’t blame Kanye for going crazy in the media lately, so I still respect the guy. I’m not a shrink or a family expert or nothing like that, but people who lose a loved one, deserved the respect. I think it’s the haters that have no compassion for Donda at all whatsoever. Kanye is fine, he did nothing wrong. Give the poor man respect while he’s going through some difficult times.

Just announced today, the talented country/pop star, Taylor Swift, will release her hit album, “Fearless” with 6 new songs. The expanded “Fearless” will hit stores, Oct. 27th. The expanded new album will also include a free DVD, with music videos of her hit songs and behind the scenes stuff of her videos.

Very cool. Big Taylor Swift fan here, so I’m definitely getting this even though I own the original album. Interested in hearing the new songs.

I’ll admit that I was a bit scared of listening to her music. I thought this girl was another one of them typical overrated pop stars, you know, fitting along the lines of Britney Spears, Lady GaGa, Miley Cyrus, etc. After finally picking up “Fearless” just out of pure curiousity, I was actually blown away by the record. The songwriting on this disc is just unique, original, different, tight, intense, chilling, etc. I can go on. The production of the record was well done. Taylor’s singing is the most maturing singing I’ve heard in a long time.

The music on the album very much reminds me of earlier alternative/pop/rock with the likes of the Pretenders, the Cranberries, Fleetwood Mac, etc. That’s what Taylor Swift reminds me of. Taylor is a rock n’ roll chick who has something going. Old school female rock, the stuff that you hear back in the 70’s and 80’s of female rock n’ roll.

I enjoyed the whole album very much so I don’t really have favorite tracks, I think the entire record overall is my favorite. So before you go thinking she’s just some stupid pop star like I did, give her album a listen, it’ll grow on you. I usually don’t like popular and overhyped music artists, but Taylor Swift is actually one of the really talented ones. I really loved the album. It’s pretty sick. I know why it dominates the Billboard charts because it really is a good album.

So today at the mall, I ended up buying Taylor Swift’s CD, “Fearless”. Don’t know why. Just did. There’s something about this chick that makes you addicted to her even if you aren’t really into this type of music (maybe that’s why she’s so fucking popular). Hey, I enjoy country music (some of it) and I kind of grown into liking her youtube videos a little bit.

Yes, she maybe a little mainstream and too pop, but she’s one of the most successful in a long while. Gotta give her that credit.

I’ll post a small review after I listen to this a few times. Haven’t listened to it yet, but will this weekend. I also picked up U2’s “No Line on the Horizon” today as well.

I usually don’t buy CD’s in the national music industry anymore, sometimes I do, if something catches my attention and if I’m interested in it. I’ve grown interest in Taylor Swift, her music may actually be an enjoyable listen.

What a shocking twist in the Billboard 200 this week. Yep, Taylor is back to no. 1. Bruce’s “Working On a Dream” made no. 1 for two weeks, The Fray made no. 1 for one week, now Taylor Swift is back at the top. Robert Plant and Alison Krauss’s “Raising Sand” moves way up quickly due to their big Grammy win, Coldplay moves up pretty high too.

I’m gonna have to pick up Taylor Swift’s album, just to see what’s so special about it. I actually came close to buying it at Best Buy a few times but refuse everytime.

Does anyone out there enjoy Taylor Swift’s music? I would think Taylor’s fanbase is nothing but mostly young kids. I don’t think 30’s and 40 something people would listen to this. If there really are people that listen to Taylor Swift who are in between the ages of 30-5o, I’d be pretty surprised. 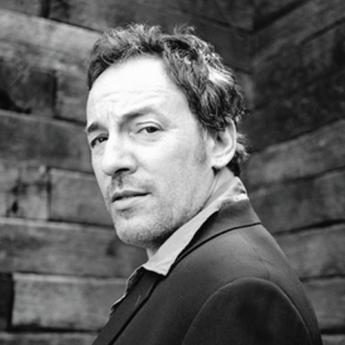 Bruce Springsteen proves once again that he can never be beat by any artist or band everytime the boss puts a new album out. The Boss puts Taylor Swift’s album to shame by ending her 8 week streak in the Billboard Top 200.

No surprise to me, the Boss is always the Billboard king. Lets see how long “Working On a Dream” album will last as no. 1. “Working on a Dream” is a great album though, I think it’s better than “Magic” and “The Rising”.