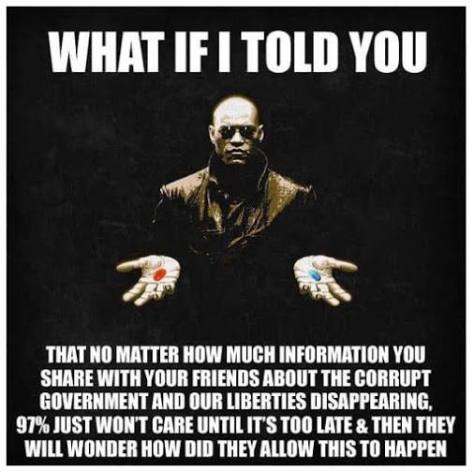 This meme is so true! Happens all the time. A good example of this is that we tried to warn liberals how bad and horrible Obamacare is… liberals didn’t bother to listen to us and they enrolled to the ACA anyways. Then later, they realized what they did was a bad idea and they admit that Obamacare was a danger to their lives. I have noticed a lot of liberals these days confessing that Obamacare is evil and admitting that it was set out to destroy lives. It’s been happening more and more if you do a little digging.

Anyway, I do my very best to warn Americans how corrupt and evil Obama & his administration really is but 97% of Americans don’t care to listen to me. It’s mostly those dumb and braindead liberals, though. There are even some so-called “conservatives” that don’t understand either.

When things start to happen to you in a bad way, I’ll be the one to tell you all, “I toldjaso, you should’ve listened to me”.

One day you’ll realize we were right that your liberties are being taken away by Barack and our government but even if you realize it, you’ll still never admit that Barack is desperately trying to destroy America. This is why you gotta stop being one-sided with your political views ’cause one day you’re gonna regret staying on the left. Soon you’ll realize that we really need Donald Trump in the White House.