63 years ago today, the Day the Music Died when a plane crash killed three young musicians after they played the Winter Dance Party concert at the Surf Ballroom in Clear Lake, Iowa. Those musicians were Buddy Holly (22), Ritchie Valens (17) and The Big Bopper J.P. Richardson (28). Buddy and Ritchie were young kids… the Big Bopper was young too but he was a little older than the other two.

I wasn’t even born yet in 1959, lol…. but I’ll never forget and will always honor it every Feb. 3rd like I always try to do. I never listened to the Big Bopper much but I respected his legacy out of this… I do love listening to Buddy and Ritchie more, though.

I would think it had to be a sad day for America and Mexico too, of course. If that crash didn’t happen and these guys lived, I’m sure they would have completed that “Winter Dance Party” tour like they originally planned. If they didn’t get on that plane during a snowstorm then I’m sure things would have turned out differently. I’m a huge fan of Buddy and Ritchie, always loved listening to both of them… and remember if it wasn’t for them then Elvis and the Beatles wouldn’t have happened, in my opinion.

It may be 2022 and it may have happened 63 years ago but we’ll never forget these three. This was pretty much the beginning of “rock n’ roll”, remember that.

When will kids of today’s generation realize that this was where real music began??? It really is sad that the music industry went from this to being obsessed with pop, rap and country that doesn’t even sound country.

Ritchie Valens career was short-lived but if Ritchie didn’t get on that plane and lived, just imagine how huge Ritchie’s career would have been? I’m sure Ritchie would have been just as big as Elvis.

61 years ago today, the music world went through a tragedy when 3 young legendary musicians were killed in a plane crash after they played a concert at the Surf Ballroom for the Winter Dance Party tour in Clear Lake, Iowa. The plane crash killed The Big Bopper (28), Buddy Holly (22) and Ritchie Valens (17).

Buddy ended up getting a small plane so he can have his new band at the time travel on the plane with him to the next show… Buddy didn’t want to end up dealing with a tour bus. Even though Buddy knew weather conditions weren’t that great, he got a plane anyways. Buddy’s previous band The Crickets broke up and he formed a new band that included country star, Waylon Jennings (who passed in 2002). Waylon came pretty close to travelling on that plane with Buddy but ended up switching his seat with Ritchie Valens and another member of Buddy’s band, Tommy Allsup ended up switching his seat with the Big Bopper who had the flu at the time. Later on that night after seating arrangements were made on the plane, the plane crashed killing all on board including the pilot.

This tragic incident may have happened years ago but the music world will never forget. We still remember even to this day as it continues to be a talked about incident through social media whenever Feb. 3rd comes around. Even though the Big Bopper, Buddy Holly and Ritchie Valens are gone, their music will be still alive today.

Some of you may ask, will there ever be a live album or a live DVD/BluRay release of the Winter Dance Party 1959 Concert of the Clear Lake, Iowa show? No. I don’t think you’ll ever see a recording released of that show ’cause why? If the show was recorded, I’m sure the industry would have released the show a long time ago. The show was never recorded. They never had that kind of technology back then. It would be cool as hell if that show got an album release but it’ll never happen unfortunately. There are plenty of photos of the Winter Dance Party 1959 concert online so that’s the closest you’ll ever get.

I can totally picture the concert in my head, though. I’m pretty sure all the bands killed it that night and I’m sure it was a blast. I’m sure that night there were a lot of dancing, screaming and hollering from the audience. Since Buddy Holly was the headliner of the tour, I’m sure he played the longest set playing all the hits. I’m sure all the women in the audience were going absolutely nuts when Ritchie hit the stage, though. It had to be a good night for all the bands.

All three of these musicians were too young, especially Ritchie who was only 17 at the time. When Ritchie was alive back then, he may have been 17 but he certainly didn’t look like it… he looked a lot older. While I admire the music of the Big Bopper… I’m more of a fan of Buddy and Ritchie. I’m a huge fan of both Buddy and Ritchie.

I’ve been listening to Ritchie’s music ever since I was a child and I still listen to Ritchie’s music. He’s just that one artist that you’ll never get tired of listening to ’cause Ritchie’s music was beautiful stuff. It’s a shame that his life and music career was cut short ’cause he would have been something. I think Valens would have been just as big as the Beatles and Elvis. When Ritchie was alive, he was still an up and coming star so he wasn’t too well-known then. The music of Buddy and Ritchie still lives on today, the same for the Big Bopper.

Over the years, a lot of bands & artists covered Buddy Holly’s songs like the Grateful Dead, the Rolling Stones, etc. The Buddy song “Not Fade Away” has been covered so many times by famous bands and musicians. Even today, Buddy is still extremely popular in America and we still love his music.

Every Feb. 3rd, I’ll always do a tribute for “The Day the Music Died” ’cause I’ve always been interested in this story. The story was widely depicted in the movie “La Bamba” which is streamable on Netflix now as that is one of my favorite films.

In my opinion, the Music didn’t really die on Feb. 3rd ’cause Buddy Holly and Ritchie Valsn kept rock n’ roll going. Rock n’ roll wouldn’t have been here if it wasn’t for them. They invented rock n’ roll, in my opinion.

Whenever Elvis Presley’s birthday or anniversary death comes around, the media and the internet is all over it; however, when “The Day The Music Died” anniversary comes around… it is ignored by everyone. I’ve never forgotten that tragic day: Feb. 3rd, 1959, and I’ll always remind people of it every  year.

Today’s music generation certainly have forgotten rock n’ roll in the 50’s. Everybody wants to focus on today’s pop music.

I love the Ritchie story and the movie “La Bamba” w/ Lou Diamond Phillips (Yes, that movie is accurate on Ritchie’s story). If you’ve forgotten about this important piece of history in music, learn.

When will I make a video tribute to the Big Bopper? Maybe I’ll do that for next year’s Feb. 3rd. How’s that sound?

Here it is. My tribute to Ritchie Valens. 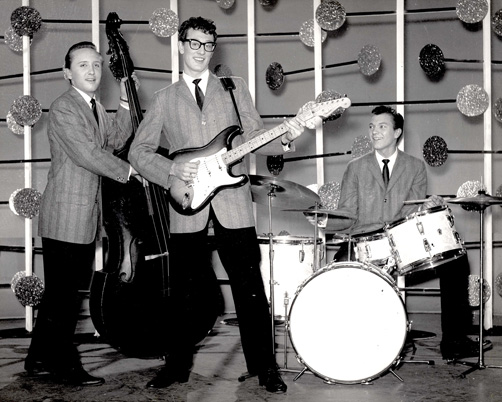 Those are nice inductions and well deserved but they keep snubbing, Crazy Horse (Neil Young’s backing band). When will Crazy Horse ever get their respect? Also, the E Street Band (Springsteen).

If you’re wondering why I’m late on the tribute, I’m still working on it. I’m not saying what I’m doing and what I’m working on, I’ll put it up as soon as it’s done. I can clue you in though, they will be youtube videos but not videos that are already made in youtube, videos made by me. Coming soon.

Tuesday is the big day for this. A lot more on this Tuesday.