So I watched Led Zeppelin’s “Celebration Day” this afternoon. Yes, the guys in Led Zeppelin maybe getting old. They may have tuned most of their well known songs down so they can fit Robert’s voice. Robert may not be a screamer anymore like he used to be. No matter your opinion on the band, they still killed it that night in 2007 at the 02. I just sat there watching the concert, being totally mesmerized of 4 guys just rockin’ out on stage and enjoying themselves.

Remember what I said, when their 2007, 02 concert, was full of hits and not enough obscure, Zeppelin songs? I was absolutely wrong! The concert was full of obscure Zeppelin songs that were either never played before live or wasn’t played much. Songs like, “For Your Life”, was a song never played live before. That song off their album “Presence”. Their song, “Ramble On” was played live a few times but never in full. This show they did play, “Ramble On” in full which hasn’t been done before. They also played, “Trampled Under Foot”, and “Nobody’s Fault But Mine”, which those songs weren’t played too much over the years in their career. The rest of their set list were their greatest hits.

Their set list is still missing many of their famous and most important songs, though. They should have threw, “Heart Breaker” in there somewhere. I also wished they played, “Achille’s Last Stand”, “Immigrant Song”, “The Rover”, “Communication Breakdown”, “Dyer Maker”, “The Rain Song”, “Gallows Pole”, “Friends”, “Out On the Tiles”, “How Many More Times”, etc.

I can understand why the tour rumors kept going because at the 2007 show, the fans wanted to hear the greatest songs that weren’t played that night. The fans wanted the band to continue on, so they can get a chance to play all of their songs live and vary up their set lists. Will Led Zeppelin ever get back together again? The band may keep denying it. The fans may doubt them, but I still say, “Never say never”. I mean, christ. The Who, is still playing without Keith Moon. So why not? I still find it a possibility that Led Zep could get back together again. Maybe not this soon, but sometime down the road.

It pisses me off that people would want to criticize legendary bands on “aging”. You see. Age doesn’t make a difference in music. As long as you have the talent and the skill, who cares about the fuckin’ age, ya know? Age is just a number. That’s all it is. Musician’s don’t give up music. They’re all going to keep playing music until they’re dead, that’s all there is to it.

Back to the “Celebration Day” Blu Ray, it was a good concert movie. My only disappointment that there were no extras. No behind the scenes footage or no backstage footage or any of that stuff. It is a must own for any Led Zep fan, though. It is worth getting. Do yourself a favor and check it out. They are still rock n’ roll genius’s.

Led Zeppelin is teasing something again, by posting a photo and a video of a zeppelin flying over Dallas, with the words, Direct TV, over a screen showing clips of the, “Celebration Day”, movie. This is a hint that “Celebration Day”, could soon be aired on DirectTV satellite.

This is a cool way of marketing.

Led Zeppelin, has always been known to come up with crazy ways of marketing themselves. I’m pretty sure Jimmy Page himself, comes up with the wild promotion ideas.

On a side note, I know “Celebration Day” have been out on Blu Ray/CD. The Holidays are upon us.

There’s been a lot of speculation on why a Led Zeppelin full reunion tour never happened after their 2007 reunion gig at the 02. A lot of people blamed it on Robert’s aging. Some even went as far as saying the band didn’t want to embarrass themselves and they could destroy their legacy if they went on. None of that is true. Jimmy Page speaks to Rollingstone explaining the whole thing. Why the band never toured. The band wanted to, and I’m sure Robert was willing at the time, it’s just that he was busy with other projects. Led Zeppelin was going to go on with a different singer, but that never happened either.

See? The band were just like us. Even they wanted the tour to happen like the rest of us but wasn’t sure.

To those in the Capital District, who are Led Zep fans, you might be interested in this, so I thought I’d pass this along. Led Zeppelin will be doing a final screening for “Celebration Day”, on Tuesday, November 13th. Crossgates Mall movie theaters in Albany, will be screening the film.

Check it out, here. 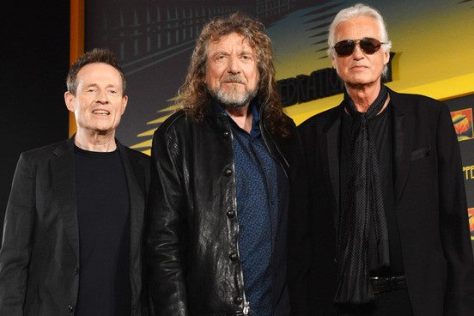 The photo above is a recent photo of Led Zep at the “Celebration Day” press conference today. Of course, as expected, the press couldn’t resist asking if they’ll ever play together again. While the press didn’t get much of an answer from Jimmy and Robert, they came back with small replies. Giving hints that they could play again in the future. Jimmy sounded grumpy when he answered the question, by asking people if they enjoyed the film, and all Robert said was “kiss and tell”. Which means it can be a possibility?
Read more, here.

Like I’ve said so many times, don’t ever doubt Led Zep. They’re a band, that’s what they do. Get together to play music so they can do what they want to do.

Edit to add: Here are even more photos from the press conference today, here.