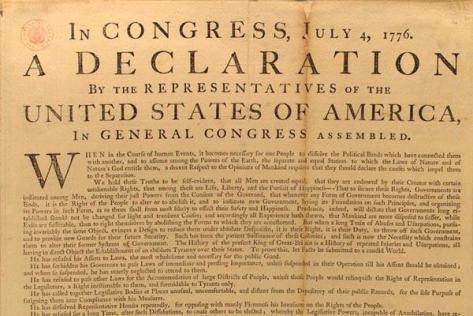 The heat is a brutal one today. Wow. Hope you’re having a good 4th of July today and trying your best to beat the heat.

Remember, 4th of July isn’t just about doing fun stuff on a day off of work. This is the birth of America. which means America has been a country here for 242 years now. That’s a long time.

July 4th, 1776 history was made by having Thomas Jefferson, John Adams, Ben Franklin and many others signed the “Declaration of Independence” and just like that, America was born.

God bless America. I love this country and always will!

While Barack Obama and George W. Bush are celebrating, “4th of July. Enjoy the fireworks.” there is a slight difference on how the two are celebrating it publicly in social networking.

In Obama’s facebook, all he posted was just a simple photo of Washington with fireworks exploding in the sky and he just made these comments, “Happy 4th Of July”.

In George W.’s facebook, he did something even better by paying respects to US troops.

For last year’s 4th of July in 2013, Obama actually payed tribute to the Declaration of Independence by posting this…

Interesting how this is isn’t it???

If a President really loved America and was a true patriot, he would have done more than just post a photo of Washington with fireworks in the sky. I’ve looked through Obama’s past facebook and he haven’t posted much about July 4th over the years. In 2010, he posted something about July 4th but he inserted himself and Michelle into it instead of paying respects to the Declaration of Independence, the US troops or the American Flag.

Obama did a speech on July 4th yesterday but it was about Immigration Reform of course, instead of it being about celebrating America’s birthday. Past presidents have done speeches on July 4th and they were all usually very powerful and inspiring speeches about celebrating the birthday of America. Obama doesn’t do that.

We have an anti-American president (if he really is an American, that is). Get over yourselves. 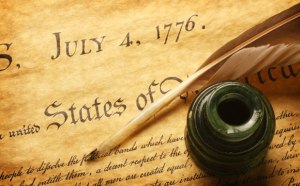 You can do all kinds of fun stuff all you want to… have cookouts with your families, go to fireworks, parties, outdoor activities such as swimming or boating, etc. — try to remember that this is the 237th year that Thomas Jefferson made us for what we all are… Americans.

This is why I take politics seriously. I love the United States of America. I will help speak out and defend our country when it starts to get really bad.

Seriously, I don’t hate on President Obama for no reason. All the man wants to do is destroy this country and give the Declaration of Independence a bad name. He doesn’t care about this or the Constitution. He’s destroying this country and many of you aren’t realizing it. I don’t hate on President Obama to start drama or do it for attention. I do it ’cause I love the United States of America and I hate what President Obama is doing with our home. I’m defending my homeland like most Americans and will do whatever it takes even if it means pissing a lot of people off.

America deserves better. We deserve to be a better nation and Obama is not making us any better. We’re gonna get rid of Obama. Like it or not. It’s what the country needs.

Happy July 4th. Stay out of trouble and stay safe.

Remember, today isn’t about fireworks and cookouts with your family and friends. It’s about celebrating the Declaration of Independence.

Have fun in whatever you readers do. Watching fireworks, 4th of July parades, cookouts, parties, etc. Just be safe and behave.