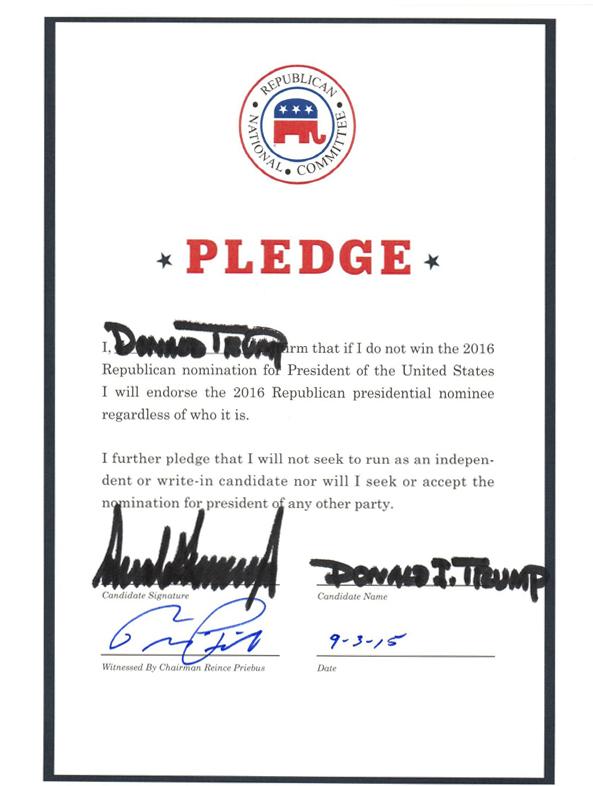 I’m sure you all are wondering my thoughts on the controversial speech that Ted Cruz did at RNC night 3 last night so here it is.

So I think Lyin’ Ted just committed political suicide last night. All the Trump supporters were wondering what Ted would have to say at the RNC since Trump himself invited him to speak. As you can hear in the speech below, Ted only mentioned Donald Trump’s name once when congratulating him on winning the nomination. That’s it, Ted only said Trump’s name once.

Trump signed a Pledge in which you can see above that if a Republican candidate doesn’t win the nomination then they must endorse the official GOP nominee which Cruz never did. Cruz never endorsed Trump once but instead Cruz talked about himself most of the time. Cruz walked out to the stage with a standing ovation by the audience and got booed at the end of the speech simply because Cruze didn’t endorse Trump when he was supposed to. Ted lost the nomination this week miserably so he goes on stage and only mentions Trump’s name once?

Ted really is a piece of garbage and last night proved that. He calls himself a constitutional scholar but I don’t see that at all.

I can’t stand Ted Cruz, he needs to get deported back to Canada where he belongs. He really is a narcissist and egomaniac.

What’s even better is that Ted was in a hurry to finish his speech as soon as Trump was entering the arena. He’s such a coward.

This guy is a desperate loser. He’s just another politician who cares about himself and not the people. It’s clear that Ted Cruz wants to be president pretty badly… well it’s never gonna happen now so good luck with that Lyin’ Ted, you piece of shit. Ted is such a douchebag. Ted is not gonna win elections by continuing to hurt the American people. He needs to show class and respect like what Donald Trump does. Trump is classy, Cruz is trashy.