Today would have been Jerry Garcia’s 78th birthday. Some may not think it but yes, I’m a huge Grateful Dead fan. Always has been since I was a young kid. I don’t think I’m a true deadhead; however ’cause I never followed their concerts like a true deadhead would do but I do have all of their studio albums and a few of their live albums, though.

Some would think that the music of the Grateful Dead would be for die-hard lefties but not really. When the Grateful Dead were around when Jerry was alive, they did their best to stay apolitical… meaning staying out of politics the best they could. Their music was meant for everybody, didn’t matter the political side. Jerry’s goal with the music of the Dead was that he wanted everybody to be happy and bring everybody together. the Dead was meant to be a peaceful thing. It may seem like that the Dead brings hippies and druggies together but not really, that wasn’t their goal either.

I love the Dead so much, though. Their music really was beautiful and amazing stuff. Jerry was a killer guitar player and was a beautiful singer too.

I remember being bummed when I first heard about Jerry’s passing in 1995… I really was bummed out like most dead fans. Unfortunately, I never got to see the Dead live when Jerry was around… this is why I’m starting to collect their live albums. While the Dead’s studio albums were great, I prefer to listen to their live albums more ’cause that’s how the band should be listened to. They were meant to be a live band.

I’ve got into the Grateful Dead ’cause I’ve got a lot of family members that are big time deadheads and I’ve got drawn into their music ’cause of them.

Even though Jerry died in 1995 and the Grateful Dead are no longer around, the band is still extremely popular even to this day. I guess that’s why Bob Weir sort of brought the Dead back together into other formations like Dead & Company with John Mayer as guitarist. So I would say Bob revived the music of the Grateful Dead??? He certainly did. I never saw Dead & Company live yet but I want to pretty badly. The Grateful Dead is still loved even to this day and we’ve never forgotten about Jerry.

Today would have been Jerry Garcia’s 73 birthday. I love the Grateful Dead. Thanks to Apple Music and Spotify, I got to listen to all their studio albums and soon I will start listening to their live stuff.

I don’t know about you but Bob Weir is one HELL of a singer and guitar player. Oh wow. Even though Jerry Garcia originally sung the lead vocals on this song, Bob still did really well. I love Bob’s guitar playing style. If you watch Bob play rhythm guitar and watch what he’s doing… he does more than just playing open chords. His fretting hand is always up and down the neck. I’m pretty sure Bob is playing a lot of chord inversions. He knows the map of the fretboard. Once you’ve mastered the map of the fretboard, you’ll be able to play chords everywhere. Really, watch the way Bob plays, he moves his fretting hand all over the place. I would like to learn how to play rhythm guitar like that.

Here’s one of my favorite tunes by the Dead. Awesome jam too! These guys are on fire, all of them! Makes me wish I went to the show.

Is it just me or is Trey Anastasio looking very nervous? I can see why ’cause he is on stage playing with the fuckin’ Grateful Dead! A dream come true for him! At the same time Trey is looking very happy and psyched.

The surviving members of the Dead still play very well together… Bob Weir, Phil Lesh, Mickey Hart and Bill Kreutzmann. They still sound like the Dead even after all these years. If Jerry was still alive, I’m sure he would have been up there instead of Trey.

I kind of wish I was at these final shows. If I find more videos with good quality, I’ll post ’em.

Here is the set/list from night 1:

Cryptical Envelopment
Dark Star
St. Stephen
The Eleven
Turn On Your Love Light
Drums/Space
What’s Become Of The Baby
The Other One
Morning Dew

I’ve heard most of those songs too. I’m trying to search youtube for some of the performances but they aren’t in youtube yet. I would love to watch the live stream but of course, you have to pay money in order to watch it.

I’ve read somewhere that these concerts will be released on CD/DVD later this year so I’ll hear it then.

Of course, you can expect there will be plenty of arrests and a lot of cops will be around ’cause police officers love going to jam band shows as it keeps them busy. A lot of drugs and hippies will be around for sure. I know ’cause I’ve seen Phish a couple of times and been to jam band concerts before. Hippies are nice people though… of course they are ’cause hippies are all about “peace and love”.

This is is pretty big news for Deadheads and Phish phans. The 4 surviving members of The Grateful Dead will play 3 nights at Soldier Field in Chicago and Trey Anastasio is set to front the band replacing the late, Jerry Garcia. The Dead picked Soldier Field to be their final show ’cause that was the venue where it had Jerry’s last performance before he passed on.

This is huge for Trey and I’m sure it’s a dream come true for him to play with the Dead! WOW! I’m a fan of both the Dead and Phish. Congrats Trey!!!

I’m sure these concerts will be recorded for a DVD/CD release so I’ll hear it then! I’m sure It will be a killer show!

August is a special month for Deadheads. Why? Because August 1st is the day Jerry Garcia was born in the year 1942 and Jerry died several days later in 1995 of the same month! If Jerry was still alive, he would have been 69 right now. If Jerry was still alive, I’m pretty sure he would still be doing what he loved doing best. Playing with the Grateful Dead. If he was still around, I’m sure the Grateful Dead would still be together today, making albums and touring like they always did. Sometimes I wondered what it would be like if the Grateful Dead with Jerry fronting was still here today. I’m sure they wouldn’t lose their popularity.

I’m a pretty big Grateful Dead fan like all the others. Some people don’t see it, but yes, I’m a Deadhead. I’ve never seen the Grateful Dead in concert when Jerry was alive but I’ve wished I did. RIP Jerry. He maybe gone, but his legacy still lives on to this day!

The Jerry Garcia Estate sadly announced the news that they will not be involved with the Amir Bar-Lev “Jerry Garcia” biopic that the film director is planning to direct. The Garcia estate refuses to license Grateful Dead or Jerry Garcia solo music for the film.

While it is sad news, the film can still go on without Grateful Dead or Garcia’s music. Maybe Bob Weir, Mickey Hart and Phil Lesh can somehow be involved with the music but make new original music for the film instead? That will probably end up happening. 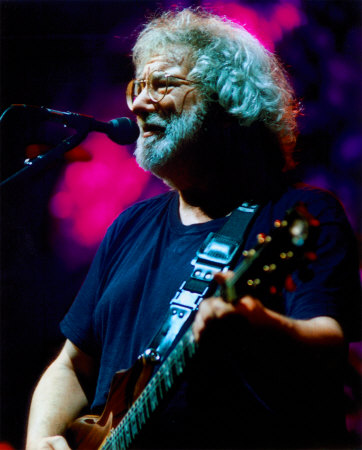 “Truckin’, got my chips cashed in. Keep truckin’, like the doo dah man, Together, more or less in line, just keep truckin’ on”…

Yes, that’s right. Jerry Garcia is on his way to the big screen with his own biopic film, and it will be directed by Amir Bar-Lev. The film will focus on Jerry Garcia’s earlier days, before joining the Grateful Dead that made him a huge star.

I think a Jerry Garcia biopic would be interesting and it’s well deserved.

So the question is? Who should play Jerry? I was thinking Jeff Bridges, but the article said they would focus on Garcia’s younger days, so they are probably gonna go for a younger actor.

They would obviously need an actor that is also a guitar player. This is a hard one to decide. Maybe the role should go to an unknown actor instead of a big name?

I’m a HUGE Grateful Dead fan by the way. Yeah, I’m a Dead Head like the rest of ’em. Except I don’t drink and don’t do drugs to the music. I don’t need to do that shit to enjoy the music, do I?