They already have plans in releasing Bowie’s theater musical starring Michael C. Hall “Lazarus” into an album soon so that’s probably gonna be the next Bowie release even though it won’t be Bowie singing the songs. Michael C. Hall will be singing on it.

David Bowie prepared a number of records to be released posthumously

While I’m sure fans would think that his record labels shouldn’t release music with him being gone, I’m pretty sure Bowie himself would have wanted them to keep releasing his music. I’m pretty sure we’ll get another Bowie studio album pretty soon. He probably already recorded a new album before his passing but never got a chance to get it out to his record label due to his health, probably.

When a famous music artist dies, the label always look for unreleased material as a way to help celebrate their music and honor that artist. We’ll get plenty more Bowie music, I’m sure.

Like I said before, if you’re a music lover… how can you not have been influenced by David Bowie? Bowie was respected by all people who loved all genres of music. Bowie influenced everybody whether you’re a musician or not, ya know?

Kirk Hammett has some cool things to say about Bowie.

Bowie was a huge influence in my own music and his music changed my life forever as well. Bowie’s songs will help get you through hard times as well.

When I first started playing guitar, I originally wanted to be just a guitar player. I didn’t want anything to do with singing at first but until I discovered Bowie’s music that’s when I decided I wanted to learn how to sing myself. Bowie’s singing was so powerful. He was so good at making his singing sound so melodic and memorable. He was great at making vocal melodies that can never leave your head.

It seems to me that a lot of music fans only like David Bowie for his popular songs. All of his well known hits that people know and love. They only know Bowie for his popular albums, really. I’m sure a lot of Bowie fans aren’t really into all of his music like me. I’ve been listening to his music for years so I can tell you for sure that I’m a true die-hard Bowie fan. What I’m trying to say is a lot of people know him for his music in the 70’s and 80’s but what about some of his newer stuff? Albums like “Black Tie, White Noise”, “Buddha of Suburbia”, “Outside”, “Earthling”, “Hours…”, and lets not forget that Bowie was also in another band that most of you probably don’t know about called, Tin Machine. Look up Tin Machine. Tin Machine has only done two albums but very good!

Everything Bowie has done in his music career is good. There’s not one album that I don’t like by him. I love every studio album he did. Ever since Bowie’s passing, I’ve been listening to Bowie albums all week so I guess you can I’m listening through his discography of albums again. Just celebrating his work.

How can you not like David Bowie? Everybody should love David Bowie no matter what genre of music you like. David Bowie was respected by people who liked all genres of music. If you’re a metalhead, you’d probably like Bowie. If you’re a country music fan, you’d probably like Bowie. He was respected by everybody and he influenced everybody in some way. Even if you’re not much of a Bowie fan at all, I’m pretty sure you’ve been inspired by him still.

I usually don’t cry and feel emotional over musician deaths but Bowie really did it to me. This one kind of hit me hard. I’ve always been a lifelong Bowie fan. He’s a huge influence in my own singing as well ’cause in case you haven’t noticed, a lot of my original songs are Bowie inspired.

Here’s the third song of my Bowie tribute series. What would be song no. 4? I’m thinking either “Quicksand” or “Andy Warhol” ’cause I started messing with those two songs.

Here is my version of “Space Oddity”. Enjoy!

One of my heroes and inspirations in my music life is now gone. I’ve listened to Bowie’s music throughout my life. He was a huge influence on my own music as you can probably tell. I’ve just recently listened through all of his albums on Apple Music streaming which I am proud of. David’s real name is David Jones but he had to change his last name so he could avoid confusion with the other David Jones who sings for The Monkees.

Bowie was known for making a lot of hit songs that you hear on FM radio everyday with classic songs such as: Space Oddity, Heroes, Golden Years, Lets Dance, Suffragette City, Queen Bitch, Ziggy Stardust, Changes, and many other smash hits. While he made tons of great hits… he was more than just a hit maker. He was a songwriter and musician. He was also more than just rock n’ roll even though he was made famous for the glam rock style back in the 70’s. He was an eclectic musician who performed all genres of music. You name it. Bowie did it whether it’ll be rock n’ roll, pop, techno, etc. The man did it all.

Bowie was also more than just a music artist. He was also a visionary artist and was big into fashion. The man was also a movie star as he had plenty of movie roles over the years. He starred in some movie roles as the leading star but in a lot of his films were mostly co-starring roles and cameos. The movie that made him famous in the movie business was obviously Jim Henson’s “Labrynth” in which he played the Goblin King. He also had a big role in Christopher Nolan’s film, “The Prestige”. Don’t forget, he also had a small role in Ben Stiller’s comedy, “Zoolander”.

Bowie released a new album called, “Blackstar” on his birthday and passed two days later. After doing a little reading, Bowie began work on “Blackstar” after completing “The Next Day”. Why was Bowie in a hurry to get another new album out this fast? Was that a sign that he knew that he was gonna go soon and he wanted to put out a new record as quickly as possible? Probably. A lot of people are shocked to hear Bowie’s passing but if you pay attention on his new album “Blackstar” and listen to some of the lyrics, he’s giving you signs that something is about to happen to him and it isn’t gonna be good. Watch the videos for “Blackstar” and “Lazarus”. What do you think “Blackstar” means? Does that have something to do with death? He’s giving you clues. That could explain those mysterious symbols under the blackstar and why he has a white blindfold with black stars as his eyes. Giving you signs that he’s about to go soon. Just his way of telling his fans goodbye. You should have seen his death coming ’cause I believe that’s what his new album was about.

Look up here, I’m in heaven I’ve got scars that can’t be seen
I’ve got drama, can’t be stolen
Everybody knows me now

Look up here, man, I’m in danger
I’ve got nothing left to lose
I’m so high it makes my brain whirl
Dropped my cell phone down below
Ain’t that just like me?

Now that you figured out why he never went back to performing again ’cause his body and his health couldn’t take the stage anymore. Talk about his health was nothing new ’cause the press talked about it for a while but never went into details. I never thought it was cancer though.

I don’t think “Blackstar” will be his final album, though. I’m sure Bowie has plenty of unreleased material in the vault so we will indeed see more Bowie music in the future.

RIP Bowie and thank you for the great music over the years. Bowie was one of the main reasons I got into songwriting and wanted to write songs on my own. Bowie was 69 years old. 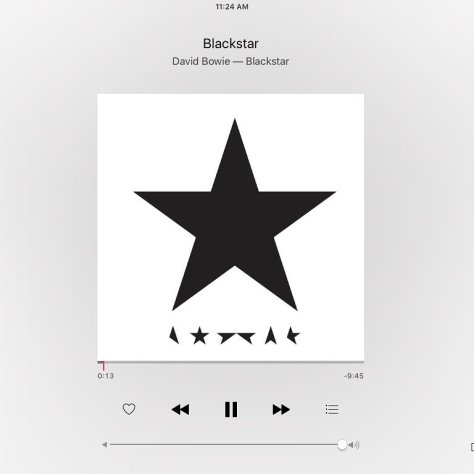 Over the weekend, I kept listening to “Blackstar” repeatedly. Listened to it like 4 or 5 times or over. I’m glad I bought my own copy of the album ’cause I’m gonna be listening to it a lot. “Blackstar” is definitely way better than his previous new album, “The Next Day”.

You guys out there should give this album a listen yourself. You won’t be disappointed at all. Every song is so amazing on this album. Yes, this album is pretty jazzy and this album also kind of fits in the current mainstream of pop music a little bit too. I don’t mind Bowie doing pop music ’cause he’s the best at pop music. This album is so fucking great. Do yourself a favor and get it!

I know I’m a day late but I want to wish David Bowie a happy birthday who just turned 69 yesterday. The man also released a new album titled, “Blackstar” which I bought and downloaded from Itunes immediately. I bought the new “Blackstar” album last night and plan to give it a listen today. I haven’t heard it but I know it’s gonna be good ’cause all of Bowie’s music is good.

I’m a die-hard Bowie fanatic as well. I heard his entire discography of albums finally thanks to Apple Music streaming. How can you not like Bowie’s music? There’s not one album that I don’t like. I love all of his music.

Below are 5 of my favorite David Bowie songs of all time.

So Dexter sings too, huh? Well, I didn’t know that. I knew Michael C. Hall is just an actor but I guess he’s more than just that. He’s got musical talent too, I see.

I thought Michael did a killer job and he sings really good too.

So why did Michael sing this song instead of Bowie the man himself?

The reason Michael sang this song is ’cause he is about to perform in an off-Broadway musical that will be directed by David Bowie in NYC.

They also did this as a way to help promote the new David Bowie album, “Blackstar”.

Michael is not just a TV actor, he is also a theater actor too so I’m sure he played in some musicals in the past before, though.

Michael’s a great singer too and I think he should make an album of his own sometime.

David Bowie’s got a new countdown going on for his website to promote the “Blackstar” album that will be released on his birthday, Jan. 8th. I think it’s pretty obvious that it’s just gonna unveil the full song that is previewed on this site. Maybe he’ll release a new music video for that song as well.

Maybe he’ll even let us hear the album in it’s entirety on his website before it comes out?

I’m excited for the new Bowie album ’cause I’m a die-hard fan. Always been a Bowie fanatic my whole life. The man is a genius.

Will Bowie announce a tour or a one-off show? I doubt it ’cause I really believe the man really is done performing live. He maybe retired from performing on the stage but not retired from making new music. Bowie is still making amazing music which is no surprise. How can you not like Bowie? All of his records are great!