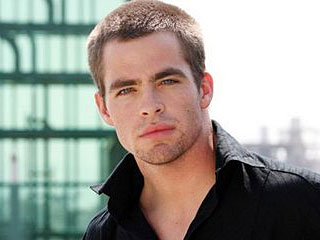 Harrison Ford may have expressed interest in playing Jack Ryan again for the next film but it’s either Harrison changed his mind or Paramount doesn’t want him.

“Star Trek’s” Chris Pine is in talks with Paramount to star as Jack Ryan for the next Jack Ryan movie.

So far there’s been four Jack Ryan movies with different actors playing them. Chris Pine could be the next Jack Ryan star.

Chris would make a great Jack Ryan. I still prefer Harrison Ford reprising the role though, wonder what’s the story on that?

Paramount Pictures has announced they found a writer for the fifth Jack Ryan movie soon to be in the works. Writer Hossein Amini, has been signed by Paramount to write the script for the next Jack Ryan flick. Hossein Amini is the writer of the film “The Four Feathers” that starred the late Heath Ledger as the leading role.

Director Sam Raimi was attached and confirmed to helm the next Jack Ryan flick, but Raimi pulled out due to a busy schedule. Now the film has no director as of yet.

No actor has been casted for the Jack Ryan role, but Harrison Ford has recently picked up interest in playing the character again, so it wouldn’t surprise me if Paramount gets him.

Harrison Ford, just announced that he will soon be working on a comedy film with director, J.J. Abrams. It is said that the J.J. Abrams comedy is the same writers who wrote the movie, “The Devil Wears Prada”. Keep in mind, that Harrison Ford starring in comedies is nothing new to him. Some of Ford’s comedies includes: “Working Girl”, “Sabrina”, “Six Days, Seven Nights”, “K-19 The Widowmaker”, and “Hollywood Homicide”. He may either work on the comedy next or the new drama which is about the pharmaceutical industry (Ford is probably reffering to that movie “Crowley”).

Later in this article, Ford is saying that he is very interested in making a return to the Jack Ryan character. A character that author Tom Clancy created. Ford starred as Jack Ryan in both “Patriot Games” and “Clear and Present Danger”.

I have been wanting Harrison to return to the Jack Ryan role for a long time. It’s fantastic to see that Harrison’s grown interest into playing that character again, when he didn’t have a heart in going back to Jack Ryan in the past. The film makers will definitely give him the Jack Ryan role again as long as he wants it, so I see it definitely happening for sure. 🙂

“Patriot Games” is one of my favorite films of all times. It’s a great action thriller.

Harrison Ford dropped a big bombshell when he spoke to the Sun newspaper that he is eyeing a big comeback to the Jack Ryan character. He said that Jack Ryan is worth re-visiting and he would like to reprise the role in the next movie. Ford played Jack Ryan twice, he played the character in “Patriot Games” and “Clear and Present Danger”.

If he can still play Indy for one more time, I’m sure he can play Jack Ryan again too. Since Indy 4 is such a big success, I’d say go for it. Harrison playing Jack Ryan again would be friggin’ badass! He obviously made the best Jack Ryan out of all the ones that played the character in the past.

I fuckin’ loved “Patriot Games” that is one of my favorite action movies of all times. I think they should get Harrison for the next Jack Ryan flick ’cause Harrison deserves a successful movie career.

Before “Indy 4” Harrison was about ready to have a failed career…hmmm… movies like “K-19: The Widowmaker”, “Hollywood Homicide”, and “Firewall” all flopped in the box office.

I hope Harrison continues to do successful movies. He shouldn’t have to become the king of bombed movies like Sly Stallone.

Paramount Pictures is in negotiations with “Spiderman” and “Evil Dead” director Sam Raimi to helm the next Jack Ryan series. Sam Raimi is currently filming the movie “Drag Me To Hell” a new horror film. Paramount wants the new Jack Ryan movie to be released in the summer of 2010.

Raimi should go for the Jack Ryan film. I never liked the Spiderman movies and I wish Raimi would get away from them.