Eric Clapton played a gig at the Madison Square Garden last night. At 70 years old, he still kills it which is no surprise really. He still plays guitar great and sings great too. I know he hasn’t played live in a long while but it looks like Eric is slowing down on the touring. Looking at his website, he’s got a small tour in the US and then he’ll be headed to the UK in May for the Royal Albert Hall gigs. Then he’s back at MSG and the Forum in Los Angeles in Sept.

Eric no longer tours heavily like he used to… probably because of his age but like I said, he still kills it on the stage and still plays great. From last night’s MSG show, Eric played most of his greatest hits. Here are three of my favorite songs of his in the videos above.

A lot of people don’t like Eric Clapton and think he’s overrated but I don’t think so. He’s a phenomenal singer and guitarist. Loved everything he has done over the year: Cream, Derek & The Dominoes, his solo career, etc. Clapton is a fuckin’ genius. Always loved his music.

All the Clapton haters will never admit that he’s an important music artist in rock n’ roll & blues. We all play the guitar because of him too. Admit it, right?

The surviving members of the Grateful Dead has formed a new band but under a different name called, “Dead and Company”. They are booked for one show at Madison Square Garden for Halloween night of this year. When the Grateful Dead used to be around, they used to play MSG all the time. John Mayer, guitarist & singer/songwriter will be joining the Dead for that night.

Just announced today, as a surprise for 12-12-12, Paul McCartney will be fronting the re-formed Nirvana, with Dave Grohl on drums, Krist Noveselic on bass, and Pat Smear on guitar. They will back Paul McCartney on vocals tonight for the Sandy Benefit at MSG in NYC. This performance is not what you think it is though. I don’t think they will be performing any of Nirvana’s hits. You won’t hear Paul sing, “Smells Like Teen Spirit” or “Come As You Are”, they will be doing a brand new, Nirvana song.

This maybe an odd collaboration but keep in mind, people, that Kurt was a huge Beatles fan. You can hear a lot of Beatles influence in Nirvana songs. I’m 100% sure, Kurt would have wanted this to happen, a Beatle to front Nirvana. If Kurt was still alive to see this, I’m sure he would have loved it. It would have been a dream come true for Kurt, and this is why they’re doing this. Honoring a late rock star.

I can’t wait for this performance to land on youtube. It’ll be interesting!

If they do end up playing a few Nirvana hits, anyway, that wouldn’t surprise me.

I must say, it was a really good show, I was impressed with it. The first half of the show was really amazing, but toward the end got kind of boring.

Tom Hanks, opened the show with a little introduction, then Jerry Lee Lewis came on the stage, banging “Great Balls of Fire” on his piano even almost at 80 years old. Jerry Lee Lewis still has it, he can still sing and play killer piano as always. Like he always does at the end of the song, he’ll stand up and kick the piano seat down, then he stood up, picked up the piano seat and threw it on the floor, and he is an old guy doing that!

Crosby, Stills and Nash, came on, and they put on an amazing performance. They still got it after all these years. The crowd in NYC gave ’em a standing ovation. When CSN invited Bonnie Raitt to the stage to sing a slow acoustic ballad, it blew my fucking mind. Bonnie Raitt has always been amazing and she still is. She’s a helluva singer.

Paul Simon played a solo set that was awesome, he kicked it right off with “You Can Call Me Al” and his vocals were quite impressive during that song. After his set, of course, Paul Simon had to bring out Art Garfunkel to the stage. Simon Garfunkel did their most well known songs, “The Sounds of Silence, Mrs. Robinson, Not Fade Away, The Boxer, Bridge Over Troubled Water and Cecilia”. It was an amazing set. I think this would have to be my favorite performance of the entire show. It was very powerful. I honestly think Art Garfunkel can sing way better than Paul Simon. Art sings beautifully, his voice is haunting.

After this Stevie Wonder came on stage, going from a variety of special guests from Smokey Robinson to John Legend to B.B. King. My favorite songs Stevie did was “Superstition” with Jeff Beck and MJ’s “The Way You Make Me Feel” with John Legend. Stevie Wonder is always amazing, he just never sucks every time he goes on stage.

Bruce Springsteen and the E Street Band were very dissapointing, not good. Only great performance that Bruce did was when he played with Tom Morello on the “Ghost of Tom Joad”, now that was an incredibly tight performance. Bruce wrote the song “Ghost of Tom Joad”, and he had Tom Morello perform with him ’cause Rage Against the Machine covered it. Bruce played the song acoustically on the album, this was full band electric. Tom and Bruce were trading licks and solos back and forth. As usual Tom Morello playing very unique guitar techniques that no one else could have played. I think Bruce was looking a little embarrassed up there ’cause he knew that Tom is a better guitar player than him. That was a really good performance but the rest of Bruce’s set was kind of boring.

Metallica however, they were ok, but nothing that great, that time. I wished they choosed better songs. It was kind of boring hearing Lou Reed play the same three chords through “Sweet Jane”, that was all he played, making it look too easy for Metallica to improvise on. The same with Ozzy and Ray Davies, choosing simple songs that the band could play.

Ozzy did a good job, but it was kind of hard to watch him. There is Ozzy the TV reality star, not the metal god he once was. He destroyed his music career and music image by becoming part of the gossip celebrity world, in the reality TV stuff. I lost my respect for Ozzy.

U2 was not good at all. I’m not really a fan of U2 anymore ’cause I’ve about had it with Bono’s ego lately.

Other than that, this was a decent show. I wished Eric Clapton didn’t pull out of this gig ’cause I can see Eric jamming on stage with his old friends like Jeff Beck for starters, B.B. King and maybe even Jimmy Page. That would have been kind of cool to see Eric, Jeff and Jimmy Page on stage together performing old Yardbirds songs which I’m sure would have happened if Eric Clapton didn’t pull out of the gig.

It was a cool show though, I liked it.

The Rock and Roll Hall of Fame is putting on a huge 25th Anniversary concert at Madison Square Garden in New York City for two nights on October 29th/30th.

Metallica has been booked to share the stage with U2, Eric Clapton and Aretha Franklin on Oct. 29th. Bruce Springsteen and the E Street Band will hit the stage with Stevie Wonder, Simon and Garfunkel, and Crosby, Stills, and Nash.

Yep, you can betcha there probably will be a huge Michael Jackson tribute at the 25th Anniversary of the Rock and Hall of Fame show, because simply put, Michael Jackson was a Hall of Fame inductee back in 2001. Maybe Metallica will cover “Beat It” again like they did at that one Grammy awards show but they’ll play the whole song next time.

James Hetfield singing “Beat It”? It may sound silly, but I think he can nail it perfectly with no problem.

I’m sure all the Hall of Famers would gather around on stage together to jam on some kind of Michael Jackson song together, lets hope they don’t sing, “We are the World/Heal the World”. I think “Beat It” would be the best choice for the Hall of Famers to jam on tributing MJ, we’ll have to wait and see what happens. 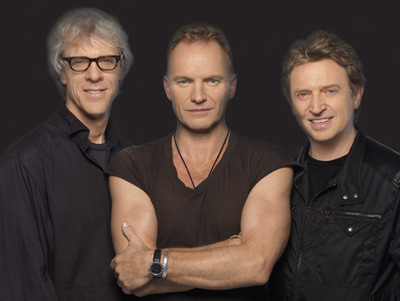 The Police – Sting, Andy Summers, and Stu Copeland played their final and last gig ever at NYC in Madison Square Garden Aug. 7th. The band played a sky rocketing 151 shows and the band made more than $358 million playing those shows.

The band played most of their usual hit songs that everyone knows such as “Message In A Bottle”, “Everybreathe You Take”, “Roxanne”, “Every Little Thing She Does Is Magic” and plenty more but the band threw in a few surprising cover songs such as Cream’s “Sunshine of Your Love”.

Sting invited his young daughters to the stage to dance along with their father during “Every Little Thing She Does…”. During the band’s cover of Jimi Hendrix’s “Purple Haze”, during the guitar solo of that song, Sting went backstage and a video screen appeared with Sting getting his beard shaved. Sting then came back out on stage, clean shaven.

When the band closed off their set, the three of the band member stood next to each other and gave the audience one final bow, hugged, and runned around on stage while the Fat Lady sang. A Looney Tunes song “That’s all folks” played as the band walked off stage.

“Sunshine of Your Love”
“Message in a Bottle”
“Walking on the Moon”
“Demolition Man”
“Voices Inside My Head” / “When the World Is Running Down, You Make the Best of What’s Still Around”
“Don’t Stand So Close to Me”
“Driven To Tears”
“Hole in My Life”
“Every Little Thing She Does Is Magic”
“Wrapped Around Your Finger”
“De Do Do Do, De Da Da Da”
“Invisible Sun”
“Can’t Stand Losing You” / “Reggatta de Blanc”

Encore one:
“Purple Haze”
“Roxanne”
“King of Pain”
“So Lonely”
“Every Breath You Take”

Encore two”
“Next To You”

The Police will also release this concert to CD/DVD which Best Buy scored the right to exclusively sell it through, that way for the fans who didn’t go will still get to experience the final concert. It will be released this year on Oct. 7th.

Sounds like a good show, I’ll buy the live CD/DVD when it hits stores.

Now Sting will probably go back to his solo career and release a new solo album after this.