They also gave up the rights to the South Park movie to Paramount. What is the reason Warner Bros. wanted to give up the rights for both films? It’s all because they wanted to make Christopher Nolan’s upcoming sci movie, “Interstellar”.

No reasons were given on why they gave up Friday and South Park for “Interstellar” but I’m willing to bet it’s about the money. “Interstellar” will be a very expensive movie to make and they wanted to save some money by getting rid of other franchises.

You know how WB’s are. They wouldn’t give up on Nolan for anything. WB’s is pretty loyal to Nolan.

Back to Friday the 13th though, I’m a fan of the series. Saw every single film. I even saw, “Jason Goes to Hell”, “Jason X”, “Freddy Vs. Jason”, and the 2009 re-boot. Yes, of course, I’ve seen all of the original series. They are great films. As for my favorite Friday movies… they would have to be the first two and I liked, “Jason Takes Manhattan” quite a lot. “Freddy Vs. Jason” was even quite enjoyable. I even enjoyed the 2009 re-boot.

Now that the Friday franchise is finally back home at Paramount after all these years, I wonder how they’re gonna handle the next Friday film? They won’t be able to make a sequel to the 2009 Friday the 13th film ’cause Michael Bay owns the rights to that movie and Paramount may not be able to work with him for the next one. Will Paramount continue the movies from the original sequels or will they re-boot the series all over again? We’ll have to wait and see what their plans are.

I’m sure Paramount is happy that they got Jason Voorhees back. I think Paramount is the only company who can make good Friday movies ’cause New Line sucked. I hope the next Friday movie will be much more like the originals. 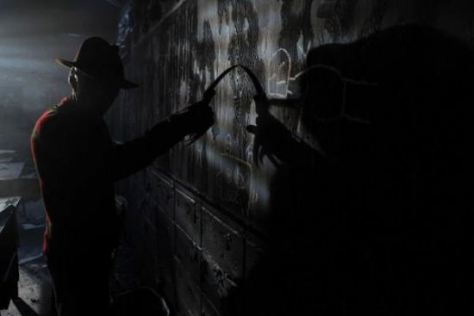 Today I just saw the “Nightmare on Elm Street” remake and here is my review:

Plot/synopsis: The story to the remake is pretty much the same as the original. Freddy Kreuger, a child killer, who was burned to death years ago. Appears in people’s dreams. Freddy murders people in their dreams which causes them to die in real life.

Again, this movie is getting mixed reviews and opinions by fans and the critics. Some hate it and some LOVED it! Me? Well, I fucking LOVED IT! Seriously, I did!!! I have always been a fan of Freddy movies. The Robert Englund ones. I probably liked the first couple of “Elm St.” films with Englund, the rest of them I didn’t care for and were kind of stupid. The “Elm St.” series went downhill after “The Dream Master”. I know the 1st “Elm St.” movie was directed by horror legend Wes Craven. Notice how Hollywood seems to be remaking every Wes Craven film these days (“The Hills Have Eyes”, “The Last House on the Left”, etc.)?

Some people claim that the Freddy Kreuger role, belongs to Robert Englund and him only. Well, that’s where I disagree. The Freddy Kreuger character is just make up. You can’t recognize the actor anyways and you can always copy that speaking voice easily. Plus, I’m sure the film makers at Platinum Dunes, got Englund’s blessing for going on without him, so I’m sure Englund is all cool with the remake.

The reason I loved this version, was that this is much darker and more evil. The new Freddy’s make up maybe bad and horrible looking but hello, it’s supposed to be like that. The new Freddy look is supposed to be disgusting. They wanted it more disturbing looking than the Englund version. The Jackie Earle Haley version looks exactly like a burnt victim. In the earlier, “Elm St.” movies, the Englund films, they made it look like he was a child killer…but in this one, they wanted Freddy to be more human like. They wanted to have the new Freddy to have some character than the Englund version. This version showed more of Freddy’s past of how he appeared to be today. The remake, made it turned out to be that Freddy Kreuger is a child molester, not just a child killer. So it makes a lot of sense of why Freddy only appears in teens dreams when they go to sleep. I think Jackie Earle Haley’s version is more creepier and darker than the Englund versions. Yes, Haley’s version still have that comical sense of humor like Englund but not much. This film wanted to keep Freddy scary, not humorous.

The plot and storyline maybe similar but the whole movie is pretty different than the original. I was surprised to see “Friday Night Light’s” star, Connie Britton, have a role in this. It’s not just a cameo with Connie, she’s one of the leading roles. Her acting is great as always. They wanted to keep this a serious horror film. Make it scary and creepy. It was kind of scary and creepy in my opinion. They tried not to make it a popcorn flick and made it an actual horror film. The film was extremely dark and it actually made me a little uncomfortable in certain scenes. I think this is one of the best horror remakes in a long while. In fact, I wouldn’t even call it a remake. I would call it a stand alone film. It’s the way the original “Elm St.” movie should have been. No offense to Mr. Craven and Mr. Englund. Looking forward to the sequel now!!!

Don’t worry Friday fans. Never say never. Another studio will probably pick up the rights so they can continue the franchise. I think it will be pretty damn cool if Paramount Pictures can get the series back. Remember, “Friday the 13th” started out with Paramount Pictures with the original series. Now that the remake is a success, that’s the only reason another studio will pick it up. There is no way this will end for good. There will be another “Friday” movie, trust me.

I know a lot of people are thinking this is a shitty idea, another pointless remake, etc. To be honest, I think a “Monster Squad” remake is a good idea and it needs one. The original was real good, but a lot of it could use many improvements with the special effects. Especially the effects with the amulet and the portal at the end of the movie. If Platinum Dunes can make the “Friday the 13th” remake really good, I’m sure they won’t fail with the “Monster Squad”.

It’s going to be interesting to see who’ll they get for Dracula. If they were to find a Dracula they would have to find a face that matches the Dracula from the original film. Also wonder who’ll get the role for the Scary German Guy or Det. Crenshaw (Stephen Macht’s role). Will any of the original cast even make a possible cameo apperance? Brent Chalem who played Horace won’t be able to ’cause he’s dead, but hopefully there will be some kind of reference to Brent in the film as a tribute to him.

I would like to see Andre Gower, Ryan Lambert (Rudy) or Stephen Macht, make a cameo. It would be sweet, I’m sure one of those guys would make an appearance.

Platinum Dunes and New Line has found their Freddy Krueger for their “Nightmare on Elm St.” reboot…and it is definitely not Billy Bob Thornton. The new Freddy Krueger taking over Robert Englund’s place is an actor named, Jackie Earle Haley.

Jackie Earle Haley starred in the recent, “Watchmen” movie where he played Rorschach, the character that wears the hat, mask and long coat.

Excellent choice! While I didn’t like the “Watchmen” movie, I loved the character that Jackie Earle played in it. The guy’s a great actor and I think he’ll make a great Freddy. Now I’m really looking forward to the “Nightmare” reboot! Bring it on!

Platinum Dunes is definitely moving forward to the “Nightmare on Elm St.” remake, as they just got the greenlight with Warner Bros. and New Line. “Cape Fear” writer Wesley Strick will pen the script. Shooting will begin this Spring right away, and they will film in the Chicago suburbs. The greenlight was due to the fact that the “Friday the 13th” remake has got positive feedback.

The question is, will Robert Englund be back as Freddy? The answer is no, of course, but it is possible that Englund will have a role but not as the Freddy character.

Expect Platinum Dunes to find an actor for Freddy Krueger very quickly since filming will start this Spring, so hope they find somebody good.

Hope they do a good job with the Freddy remake and hope they find the right actor for Freddy. Sure, there can’t be a Freddy movie without Robert Englund, but the dude is getting too old to play the character. My bet, is that I think they’ll find a Robert Englund look alike to play Freddy. It’ll probably be an unkown actor, not a big name star.