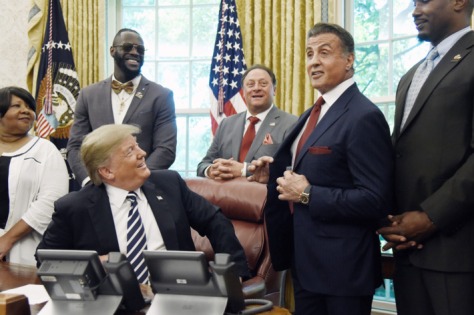 This is how you treat the president. Treat them with respect and gratitude. While most celebs are awful, Sly is one of the few good ones with an actual brain. You hear that, Robert Deniro?

Sly is a good man. He’s just one of those that doesn’t go around hating other people ’cause he’s better than that. Sure, I’m sure Sly doesn’t agree with some of Trump’s political views but he’s smart enough to treat him with respect and gratitude anyways.

Sly’s looking very happy, though, you can tell. Jack Johnson getting a pardon by the President was long overdue. Barack Obama was asked to do it in the past but refused. If it wasn’t for Sly, this wouldn’t have happened.

There was a time where Trump asked Sly to work for a position in his admin. but Sly refused. Trump and Stallone still remain friends as you can see here.

Most of Hollywood must be pissed as fuck at Sly for this but fuck ’em, though.