I know it always seems like that Angie is a die hard liberal over the years but is she really? After her last two directed films, “In the Land of Blood and Honey” and “Unbroken”, I’m starting to see the conservative views in her. Maybe she’s finally coming out of the “right-wing” closet? I knew she couldn’t have been a liberal ’cause she grew up in a conservative family especially her father, Jon Voight who is openly “conservative”.

I know there are too many liberal celebs out there but I don’t think she’s one of them. Why are some celebs so scared to admit they’re conservative? They hid their conservative views to save their careers. If they openly admitted they are conservative, they could lose respect and lose their fans. They would get looked at as a crazed “right-winger”… just ask Ted Nugent, Donald Trump and actor James Woods.

I don’t think Angie is a liberal, she can’t be. Maybe she still is but maybe she’s being more sympathetic to the conservative community.

Honestly, though, I don’t care what her political views are ’cause I’ve always been a fan of her work over the years.

Plot/synopsis: An Olypmian track runner named Louis Zamperini was deployed to fight in a plane during World War II but he ended up getting stuck on a raft for 47 days in the Pacific ocean after the plane was shot down. Then later he was captured by the Japanese and sent to Japanese prison camps.

I know this film is gonna get a lot of criticism ’cause it’s directed by Angie and I know she’s not everyone’s favorite person but I loved her for a long time and still do. I’ve supported her work for years and for a long time now, I had a feeling that she was gonna turn into a director someday and she’s making her directing dreams come true. One thing to keep in mind, though that this isn’t her directorial debut. Her film, “In the Land of Blood & Honey” was her directorial debut. “Unbroken” was her second directorial film.

I thought “Unbroken” was really really good. It was a pretty powerful and sad film. It kind of had the same feelings of “In The Land of Blood & Honey” which was also a great film. I thought Jack O’ Connell was perfect to play a young Louis ’cause him and the real Louis look almost exactly alike if you google the pics.

I thought Angie did a great job with her directing style. The camera work was very well done and the cinematography was well done too. Angie seems to know what she’s doing. Even if she haven’t had much directing experience in the past, I’m pretty sure she learned how to direct by acting in movies over the years of her career. She spent most of her life acting in film and I’m sure she learned directing just by watching other directors. I’m sure other directors taught her some stuff as well. It seemed like she took this movie seriously and definitely seemed like she knew what she was doing.

I thought the acting of the entire cast was well played and was impressed with Domhall Gleason (who’s one of the cast members of “Star Wars: The Force Awakens”.

The torture scenes in the film can get quite graphic and disturbing, though. The torture was the whole point of the movie ’cause without the torture, it wouldn’t work. I haven’t read the book which the film is based on but maybe I should read the book pretty soon.

After watching, “In the Land of Blood & Honey” and this film here, I think Angie is gonna be a great director. She already is a great director and she has a huge directing career ahead of her. I’m actually glad that she wants to move on from acting and start directing. I thought she did a great job.

I’m sure people are gonna accuse her of chasing an Oscar for this film but I don’t think so. She wanted to bring America’s attention of what Louis went through and to show that he was an American war hero. It’s a pretty important and serious film that should be seen by all Americans. It wasn’t really made for your popcorn entertainment. If you’re expecting, “Black Hawk Down” or the “Hurt Locker”, look else where. This isn’t that kind of war movie.

… but I completely understand why she wants to do it.

Just like Drew Barrymore, Angie have been acting in films ever since she was a child. Angie was 7 when she got her first film role in “Lookin’ To Get Out” in 1982. She’s been acting in film ever since. As a long time Angie fan, I’ve been watching her films ever since before everyone knew who she was. I’ve followed her career for a long time and watched most of her filmography. Even back in the old days when she starred in films like: “Cyborg 2”, “Hackers”, “Foxfire”, “Gia”, “Pushing Tin”, “Girl, Interrupted”, etc.

I can’t blame her for wanting to hang it up and try some directing.

I’ve watched her directorial debut, “In the Land of Blood and Honey” on Netflix and it was a powerful film. She did a great job in her first directed movie.

I’ve loved Angelina for a long time and still do. She was smokin’ hot back in the day and she still is hot. I’m gonna miss seeing her on the big screen but I’ll still support her directing films too. Now that she’s married to Brad, she probably wants to focus on being a Mom more too. That’s another reason.

I loved her in that “Maleficient” movie though and planning to get that film on BluRay hopefully soon.

I support her decision and wish her luck.

Here’s a cool clip from the “Maleficent” movie. Angie with wings flying. You can see it’s a pretty fun scene.

I loved this movie and will probably get it on BluRay when it comes out.

I did end up getting the Pinnacle Studio app for the Ipad and this the first video I made with it. Enjoy. 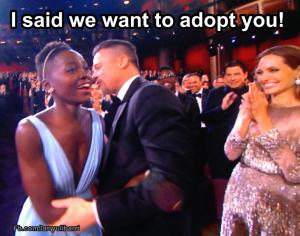 This just came up in my facebook newsfeed. I thought it was pretty funny so I decided to share it here. Before anyone gets mad and calls me a racist… this photo is not racist. The joke is that Brad and Angie has been known to adopting kids from Africa and other countries.

Lupita is a pretty woman, don’t get me wrong but her chest was kind of uncomfortable to look at. She doesn’t have much of a cleavage to show off but I still give her credit for showing off her skin.

The visuals looks pretty stunning in this new trailer for the Disney film, “Maleficent”. I like what I see so far. I’m not a very big Disney fan by any means. I only like the classic Disney movies like “Snow White”, “Cinderella”, “Pinocchio”, “Bambi”, “Dumbo”, etc.. I only like a few new live-action Disney films like the “Chronicles of Narnia” series for example.

I’ll probably end up seeing, “Maleficent” in theater. I think I’m pretty much sold to it.

I hate most live-action Disney films but I’m actually looking forward to, “Maleficent”, with Angelina playing the famous, “Sleeping Beauty” character. The poster for the film, “Maleficient” was released today.

Now that the poster is out, I’m looking forward to the film even more! All I need next is a trailer which I think will be released tomorrow. I’ll post it asap. Most new Disney films are horrible these days but I’m hoping this will be a good one. The story sounds interesting so far.

Angelina Jolie makes her first public appearance at the World War Z premiere with Brad Pitt since her double mastectomy announcement. Angie still looks the same; however, slightly different. Look like she decided to make her breast size a little bigger; either that or she’s got something hidden in her dress that’s making it look like she has boobs — noticing the dress she is wearing is totally covering them. Well guys, sorry to say but it looks like you’re gonna have to say goodbye to her hot cleavage as it looks like she won’t show it off anymore.

It’s kind of sad that she would go to this instead of her Aunt’s funeral who just died of breast cancer. If she claims she supports women with breast cancer, you’d think her and Brad would cancel the World War Z premiere so they can support her family? Maybe people are right that this couple are all about ego. Spoiled rich people who craves the publicity.

I know all of her male fans are pretty upset and disappointed that she removed both of her breasts but I totally support her for her ballsy decision. Her breasts is a huge part of what made her an iconic figure in Hollywood. In her younger years in her career, she used to be naked in films a lot — most notably her film, “GIA”. Her huge breast size also helped her get signed as Lara Croft “Tomb Raider” and other action movies that made her sexy. Her image was all about sex in her earlier days in her career. As she got older and now has a large group of adopted children with Brad, she immediately got out of her sexy eye-candy image to focus on family. Now she got out of her eye-candy image for good by removing her breasts completely.

Her mother died of ovarian cancer and Angie was worried she was gonna get the same thing. So pretty much, the main reason why she removed her breasts ’cause it was in fear of getting cancer and she removed them hoping that will help avoid it. This was a really brave and ballsy move no matter what you think of it. I’m sure she was scared as hell to do it and it was the toughest decision to make. You gotta feel sorry for Brad though, since he won’t have any tits to play with but kudos to him for sticking with her and getting his full support.

I’ve been a fan of Angie for years. Goes way back before she even became an iconic star. I’ve been a fan of hers since her films: “Hackers”, “Girl Interupted”, “GIA”, “Pushing Tin”, etc. Still am a fan of hers and still love her to this day. I love her even more for doing this brave move. She has always been heroic and inspirational. She did great things for the country and for children overseas.

I’m sure she’s going to miss having boobs but she wants to do what’s best for her children and her family. She wants to be alive for them.

Now that she did what she did, what now? Is she still gonna act in film? She still has Disney’s “Maleficent” that she’s going to star the lead in. That film might be her final role in front of the camera, but I think she wants to concentrate mostly on directing films in the future. She is an incredible woman, though. Even though I don’t like most celebrities in this industry, I’ve always had the utmost respect for Angie.

It’s gonna be interesting to see what she’s gonna look like now. I’m sure a new picture of her will surface the internet soon enough. She’s probably gonna be flat-chested and much thinner now, I would think.

Congrats to Angie. She’ll inspire many women around the world because of this. I think other women will follow.