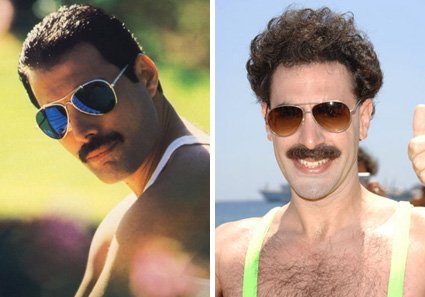 Sacha Baron Cohen has always been known for shocking and controversial humor in his flicks. Will he have that again for his next, “Freddie Mercury” movie? I don’t know. I think the “Freddie Mercury” biopic will be more on the serious side then humor. Maybe that’s why Sacha signed on to the role? He wanted to do something new and different besides comedy. There will obviously be some humor in this biopic film since Freddie was a very weird and humorous guy, but there won’t be any of that shock factor that Sacha is known for. Freddie was known for his shock factor live performances with Queen, I think that’s why the film makers wanted him.

This will give Sacha an opportunity to really show his acting talent other than the comedy genre. I’m seeing this movie to be very emotional and sad. Can you see Sacha giving a powerful performance for Freddie’s death scene?Before Freddie’s death, on his last days, he wanted to help the world with AIDS awareness, I can see the film concentrating on that. The funeral will be interesting, Elton John and David Bowie may have to make cameos ’cause they were there at Freddie’s funeral.

The film will start from the beginning, at his childhood to his death like most biopic films are like that. It might focus on his relationship with Mary Austin, Freddie’s first true love, then it will probably go onto his bi-sexual days. If you watch Freddie Mercury’s older interviews and seen the film, “Borat”, you can see the similarities between both of them.

Sacha is going to nail this performance. I think he will perform Freddie Mercury perfectly. Like I said, I think this film will show a different side of Sacha. It will be nothing like Borat or Bruno at all. I’m sure Sacha will be working closely with Brian May and Freddie’s family members, I’m sure Sacha will work with Mary Austin as well, to learn more about Freddie’s history and personality. I’m glad Sacha got this opportunity. Here’s hoping for an Oscar award for Best Actor.

Probably the best thing the Muppets has ever done in a long time. I LOVED THIS! 🙂