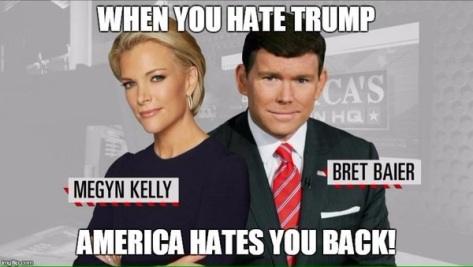 FOX News and Megyn Kelly has been doing nothing but attacking Trump on their news shows ever since Trump announced he was running for president. FOX News just posted a statement on their facebook after Mr. Trump started calling them out on their bullshit. FOX News think they can get away with the Trump bashing for sure. They started in on Trump during the GOP Debates. FOX News is so biased against Trump, it’s pretty crazy. What kind of news network that will go from Obama bashing to Trump bashing?

If you wonder why the Republican/Conservative side is so divided as of late, I totally blame that on FOX News for sure. Fox News is in bed with Ted Cruz and they are the ones who taught Cruz supporters how to hate Donald Trump.

Megyn Kelly does nothing but bash Trump on her dumb show “The Kelly File” night in and night out and she doesn’t think Trump will respond to her attacks against him? FOX News is accusing Trump of having a sick obsession with her but it’s actually Megyn who has a sick obsession with Trump!!! Mr. Trump is way too busy campaigning for his presidency so he doesn’t have much time to mess with Megyn so FOX News’s accusations against him are absurd. Mr. Trump just has a right to respond and to defend himself. FOX News does nothing but attack Mr. Trump all the time but they cry like a baby when Trump calls them out for it.

You can’t trust news networks at all, man. The news networks especially the big ones has full of shady and corrupt people. I don’t watch the news anymore for these reasons. If you hate Donald Trump just because the media does then you’re dumb and naive. Stop taking the media seriously. It’ll do you some good, trust me. A lot of people accuse me of watching FOX News ’cause of my “right-wing” views but I hate FOX News like most people.

Mr. Trump should sue them to the ground. If Hulk Hogan was successful at taking down Gawker due to privacy then I’m sure Trump can take down FOX News due to slander and libel which is what FOX News is doing to Mr. Trump… they’re slandering and libeling him for sure.