According to Adam Lambert himself, he is the new lead singer for, Queen. I’m no fan of Lambert, but I must admit this is an interesting choice. He does resemble Freddie Mercury and even sings like him, so why not? I’ll give him a chance.

I just want to respond to this:

There is a reason that girl on girl action doesn’t get censored on TV and man on man action does. That word again, the “ick factor”. Look it up if you don’t know what it means.

I’ve said in a blog post that people are used to seeing girl on girl make out action, while most people don’t want to see man on man action. It’s really quite simple to understand.

I don’t see a double standard in any of this at all. It’s just the people’s way of defending “equality” and gay rights.

The censoring on the “Early Show” and cancelling the Good Morning America performance, has nothing to do with Adam Lambert. It’s all about the material that is being brought in the performance.

I agree with the censoring. I don’t think any guy would want to wake up in the morning and while switching channels you see that going on while he’s drinking coffee or something before work.

Girl on girl kissing is less graphic than man on man action.

On top of that, this isn’t the first time that famous bands brought in homosexual material into their performances. The Red Hot Chilli Peppers has done it many times, also David Bowie and Nirvana has done it. Kurt Cobain and Dave Grohl made out on stage plenty of times.

Adam Lambert needs to leave this stuff at the gay bars. This is where he needs to go back to performing, not on TV. I’m not being anti-gay. Adam Lambert is an attention whore with a capital W and he’s just doing whatever it takes to help promote his upcoming album.

Here is a perfect example of David Bowie shock factor back in the 70’s. Here is a video of David Bowie performing with Marriane Faithful on a cover of the Cher and Sonny Bono song, “I Got You Babe”.

Look what David’s wearing. He’s wearing a woman’s dress and plenty of makeup. There are also male dancers with their shirts wide open. Very close to a homosexual themed performance.

If Adam Lambert is trying bring these gay themed performances back on the stage like David, Queen, Kiss, Prince and Alice Cooper did…Adam is not doing a very good job at it and trying too hard.

I’m sure David Bowie is laughing his ass off at that performance as well. I’m sure it reminded David of his past when he was younger when he wore all that makeup and women’s lingerie on stage back in the 70’s. David did some silly things in his performances in the 70’s, but at least he can sing incredibly and performed well in his earlier years.

“Wonder how much backlash MTV received when Britney Spears and Madonna had their infamous kiss?

Oh wait, people were loving it!”


He is correct. Most people loved the Britney and Madonna kiss. Why is that?

The reason so many people are offended at the man on man kiss with Lambert and the dancer is because there are not a lot of straight people out there that enjoy seeing two men kiss. Most people do find two men kissing disgusting. It shouldn’t be on network TV, on a regular TV channel, that is not cable. It is something called, the “ick factor”.

It was more accepting for MTV with Madonna and Britney because it’s on MTV and it was a PG-14 thing. Remember, before the MTV Awards air on TV, there is a “mature viewing matters” warning before they start the show on TV. Letting people know beforehand that there will be plenty of adult material on MTV Awards.

The American Music Awards which is on ABC, a network non-cable station, didn’t do that. This is the reason for the backlash against ABC. ABC are stupid idiots that allowed this. ABC needs to suffer some harsh consequences for this. ABC is a family friendly station and they screwed this up.

It was an embarrassing performance, and I’m sure Lady Gaga would have handled the homosexual themed performance much better as she usually does.

What ABC did was ridiculous and all they are doing is trying to follow the footsteps of MTV. Do a shock factor for ratings and controversy.

I have no problem with gay people as I respect them, but Adam Lambert is a joke and a prick who deserve no career in the music industry. His album will fail and won’t even reach high in the Billboard charts. End of story.

This performance is really bad. Everything about it. The lip synching, dancing, and very offensive overall.

Adam Douchebert is clearly trying to rip off Prince. It’s very similar, Prince styled…but Prince is the king of these performances. Adam tries too hard and very amatuerish.

Boycott Adam Douchebert. I never liked this idiot and don’t understand the popularity of him. It’s typical for fans who obsess with the mainstream too much. 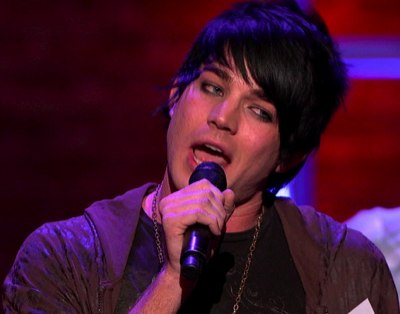 Although, Paul Rodgers parted ways with Queen, it is no surprise to me that the band is going to keep going and look for a replacement singer. It seems that they have already found someone. Adam Lambert, the American Idol loser. Adam performed “We Are the Champions” with Queen along with Kris Allen on the Idol finale. Brian May seems to be impressed with Adam as well and already asked him to join the band. It seems that Adam is definitely game in joining up.

I never watched this season’s Idol, but after seeing Adam perform for the first time in my eyes, Adam is actually not that bad. Almost sounding close to Freddie Mercury, so I can see why Brian would want him.

I’m no Idol fan anymore, but this is a phenonemal performance. I love it!

Would I want an Idol star fronting one of the biggest rock bands in the world? I’m sure the die hard Queen fans are hating on this idea, but I’d say go for it. Give a young star an opportunity instead of all these old has beens!!!