A huge fight broke out between actor/pro boxer Tony Bellew who plays the character, Pretty Ricky and another actor — when things got really heated, Sly of course had to jump in. A source said that Sly started screaming and ordering it to stop. Of course, they did.

More on the story here:

So Sly the peacemaker. No surprise there. That’s what you get when you have a real life pro boxer on a movie set, you’ll have to deal with a lot of egos. They were quick at stopping the fight when Sly jumped in ’cause why? Well, he’s Sylvester Stallone for one. A legend. Plus, Sly is a huge guy, muscular and ripped. I’m sure the two guys shut their mouths real fast when Sly showed up. You don’t mess with Sly.

Something tells me Sly have done this before on movie sets… stopping fights so this is nothing new with him, I’m sure.

Adonis Johnson (Jordan) never knew his famous father, world heavyweight champion Apollo Creed, who died before he was born. Still, there’s no denying that boxing is in his blood, so Adonis heads to Philadelphia, the site of Apollo Creed’s legendary match with a tough upstart named Rocky Balboa.

Once in the City of Brotherly Love, Adonis tracks Rocky (Stallone) down and asks him to be his trainer. Despite his insistence that he is out of the fight game for good, Rocky sees in Adonis the strength and determination he had known in Apollo—the fierce rival who became his closest friend. Agreeing to take him on, Rocky trains the young fighter, even as the former champ is battling an opponent more deadly than any he faced in the ring.

With Rocky in his corner, it isn’t long before Adonis gets his own shot at the title…but can he develop not only the drive but also the heart of a true fighter, in time to get into the ring?

Is Rocky gonna get killed off in this one? I believe this is the final time that Sly is gonna be playing the legendary character we all love. While it maybe sad that Rocky could get killed off, it would make a very dramatic and powerful scene. I can see Sly pulling off some really good acting chops during Rocky’s death.

I remember nobody wanted Mickey, Apollo and Adrian to die but those deaths made the movies more intense. Well, in the film “Rocky Balboa” never showed Adrian’s death which made it even more interesting. The previous Rocky film, “Rocky Balboa” (Rocky VI) got mixed reviews but I still thought it was a great Rocky film… I just wish Sly didn’t direct it and he should have brought John G. Avildsen back at the helm.

I’m looking forward to the film “Creed” but keep in mind, Rocky being a trainer/mentor of somebody is nothing new ’cause that’s what Rocky did in “Rocky V”. Rocky was Tommy Gunn’s manager. “Rocky V” didn’t get great reviews either but I still liked the film for what it is.

I’m sure in the film “Creed” Sly will still kill it as Rocky. Even though this is a spin-off, technically this is Rocky 7… kind of funny ’cause Sly said he would never play Rocky again after “Rocky Balboa”. Wonder what made him change his mind? 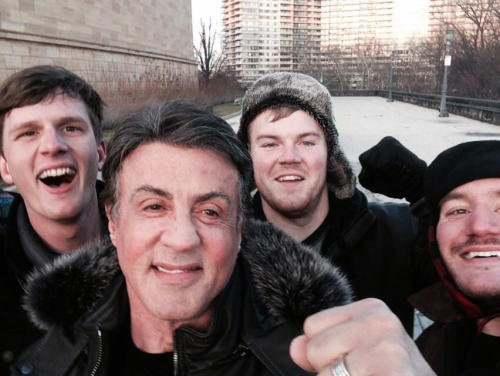 Sylvester Stallone is back in Philadelphia to film the Rocky spin-off film, “Creed”. While there, I’m sure Sly couldn’t help himself but look back and re-visit all the old filming locations for all the past “Rocky” films. A group of tourists went to the Philly Art Museum where Rocky did his famous training scenes by running up the steps. The group of tourists ran up the steps just like in the Rocky films and at the top of the steps, Sly the man himself happened to be there. The group of tourists and Sly decided to hang out for a little bit and take photos as you see above.

Oh man, those guys are lucky! I wish I could get my chance to meet Sly in person! As you can see, Sly is great with his fans and his supporters.

It had to be pretty emotional for Sly to re-visit his old Rocky film locations. I wonder if he went to visit Micky’s old gym. I’m sure he did. I also wondered if Sly re-visited Rocky’s apartment (remember, it was a shit hole). Not sure if Rocky’s old apartment is still there or not. We might even see these locations again in the “Creed” film including the Art Museum.

Where the screenwriting is done. pic.twitter.com/ISrobCeveW

Sly Stallone just posted a cryptic photo on twitter of his desk in his home office. He showed where he does the writing of his scripts. Sly doesn’t use a computer for writing scripts? Ha! I’m sure he uses a computer, though.

He confirms he’s doing one last Rambo film after “Creed” and then he’s gonna do a film about mobster, Gregory Scarpa.

I’m glad Sly finally confirmed one last Rambo film and I’m sure it’s gonna be badass. I did like the Rambo film that was released in 2008 but it needed to be longer. I’m sure the next film will be longer and even more violent than the last one. I’m sure Sly will grow out his long hair again for the Rambo role. Will Sly direct the last Rambo film himself, though? Honestly, I hope not ’cause while I’m a huge fan of Sly, I don’t think he’s the greatest director in the world, though. He should get someone else to direct the final Rambo film if he wants it to be great.

Here’s what I think is gonna happen to Rambo in the final film. SPOILER ALERT: Rambo dies. Ha!

Yeah, Sly said before that he would be willing to kill Rambo off in order to end the series. Rambo was originally supposed to die in the first one but of course, they had to change the script so Rambo can live for the sequels.

I’m still a huge fan of Sly though and look forward to every new movie he comes out with.

Is Scott Stapp being honest on money being stolen from him? I’m beginning to think he isn’t. Admittedly, this story is getting weirder and weirder. Stapp made three videos via his facebook page going on rants about how his money has been taken from so he goes to the police to file a complaint. The singer even filmed a video of himself going to the police and he showed the police complaint on video. Of course, the videos were taken down from his facebook page but I’m sure you can find ’em in youtube.

I’m sure the police tried to investigate the singer’s claim of his stolen money but it’s looking like they’re giving up on him since he couldn’t be contacted anywhere. He reaches out to the police begging for help and when they said they were willing, he now refuses to be helped? Wow. Something’s definitely not right here.

I don’t know who to believe anymore ’cause honestly that whole family are a bunch of whack jobs.

Scott’s facebook page is getting pretty fucking scary. He’s getting weirder and weirder. Are all these song posts he’s been posting suicide notes? Is he threatening to kill himself again? Pretty scary how he went from posting three videos ranting about how he claims to be broke and homeless, then went to posting about listening to his favorite songs on facebook.

He’s definitely scaring his fans and his supporters.

Maybe there is nothing wrong with his wife and she’s probably just as scared of him as we all are.

To all tho confused, my father once again chose drugs over his family. He needs help, but refuses to get it. He's been on a 9 week binge

In Scott Stapp’s videos, the Creed rocker claims he is 100% clean and sober. Scott claims he doesn’t do drugs and drink alcohol anymore. According to his son, Jagger, that is not true. The tweet above appears to be Jagger’s twitter.

I’m surprised that Jagger’s tweet about this didn’t go viral yet but give it time… it will. I’ll be honest that Scott does seem a little messed up in those videos.

I haven’t been following all the Scott Stapp drama until he started posting those three videos on his facebook page. He took them down, though which is a good thing. In my opinion, he shouldn’t have made this stuff public.

I think it maybe possible that it’s his gold-digging wife, Jaclyn did this to him. Took his money and made him homeless. If you’ve noticed in his videos he posted, he never exactly went into details of how he got homeless. Did his wife kick him out of the house or what???

Scott claims he’s broke and homeless but keep in mind, you can’t trust rock stars either.

I don’t see how Scott can be broke after making millions from his Creed albums and his solo records. The guy is still working on music and tours often.

He does seem like a nice guy, though after seeing those videos. I wish Scott well.

This is very sad. A shame what’s happening to former Creed frontman, Scott Stapp who is now homeless due to a nasty battle with the IRS. While squashing rumors of his death and drug/alcohol addiction, Scott posted a 15 minute long video revealing to the whole world of what’s going on in his life right now. It’s not very good either and this is coming from a singer who fronted one of the biggest band’s in rock history. Creed only released 4 albums in their career and all of them were very successful in the Billboard charts. They were a pretty mainstream and commercial band in the late 90’s and early 2000’s years.

If you think being a rock star makes you rich and make you feel glorious with all the fame and fortune, you may wanna watch this video.

I’m a fan of the band Creed. I know this band is not everyone’s favorite but I dig the band. I bought their albums and saw them in concert like two or three times. It was an honor to see Scott sing on a stage when I had the chance.

I don’t wanna gossip about him or speculate on what’s going with his personal life but it sounds like his divorce with his wife may be a part of it.

The video is pretty sad and almost brought tears to my eyes admittedly. Remember, being a rock star is not always great. You’ll deal with a lot of setbacks. A lot of ups and downs. Fame and fortune can ruin your life.

This just goes to show how shady the IRS really is and what the economy could do to all of us. Wake up, America.

It may not be “Rocky 7” but close enough!!! I guess you can call this film a bit of a “spin-off” from the Rocky franchise. Sly’s next big screen movie will be “Creed” which is going to be about Apollo Creed’s son aspiring to be a boxer like his father so he can meet Rocky to possibly help him train or give him advice.

It’s gonna be great to see Sly reprise his role as Rocky for one more round. As long as Sly is still playing Rocky in this film, I’ll go see it.

I’m looking forward to seeing a trailer of this film soon.