The cast was great. I like Robert Downey, Mickey Rourke, Scarlett Johannsen, Samuel L. Jackson, Don Cheadle, Garry Shandling, Sam Rockwell, etc. but even they couldn’t save this movie. It seemed that Jon Favreau hogged up most of the screen time than anybody else in this film which is what annoyed me the most. I absolutely loved the first “Iron Man” film, it was a brilliant film but I think Favreau just ruined the series. The acting was bad, writing was bad, terrible filming, etc. I can go on. Mickey Rourke’s villain charactter, Whiplash was very cool, but he wasn’t used much in the film. There was too much story, not enough action. When you see an Iron Man movie, you want to see a lot of action, I felt this movie failed to have that. This is the worst movie I’ve seen of 2010 so far. It’s nothing I would watch again. 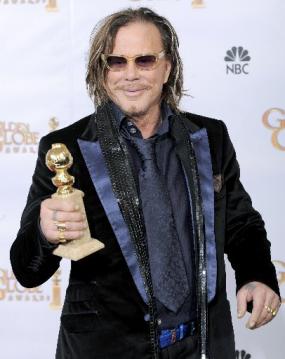 Mickey Rourke recently had an interview with Parade.com website, he said a comment that is creating some controversy online. Mickey Rourke says:

“You can be less than mediocre and be a f—ing movie star. I have respect for very few actors and actresses.”

“”Some of them get a lot of acclaim but just because their movie made $200 million at the box office; they still suck. I got no respect for them and I used to let them know it. It was important for me to put that aside and go, ‘You know what? This is a business. If you kiss the right ass and you get lucky on a movie or two, you could last 10 years.’ So, now, I just keep my mouth shut and pet my chihuahuas.”

Most bloggers on the internet are slamming Mickey Rourke for his controversial comments on how “most actors and actresses suck”. His opinions maybe harsh, but hey, people, it’s a free country so he has a right for an opinion.

I for one, am with Mickey Rourke, I agree with him 100%. Most actors and actresses do suck these days. There are only very few actors/actresses that I respect that bring out the good acting chops as well. A lot of today’s huge box office movies such as “Avatar”, “Iron Man” and such movies as those…they have actors/actresses in the leading roles of those type of movies which their acting skills aren’t really that great. That’s what Mickey means by his comments. For example, Sam Worthington is a horrible choice for a leading actor in “Avatar” and I think it would be a better movie if they had an actor with the talent. Robert Downey Jr. is okay, but he’s nothing special anymore. I like Robert Downey’s acting in his earlier movies when he was doing all these serious dramas, now he’s a popcorn action star.

There are very few actors and actresses that I respect too. For actors:  Daniel Day Lewis, Al Pacino and George Clooney. Those are actors with actual talent, in my opinion. For actresses I would pick: Nicole Kidman, Meryl Streep, and Kate Winslet. While I like Sly Stallone, I’ll admit he isn’t the best actor in the world, I just like him for the entertainment, nothing more. The same with Arnie Schwarzenegger.

Mickey wants people to look at the actor’s talent. Not worrying about how much money a movie makes. You have to admit that Mickey is so right on everything he says. The only reason the online world is mad at his opinions because they know he’s right on the money. I also think Mickey Rourke is a talented actor himself, he’s been in lots of great flicks. Of course, I think “The Wrestler” is his best movie.

It’s Ac/Dc and Iron Man in one video. Shoot to Thrill! And plenty of “Iron Man 2” footage. I’m sold to “Iron Man 2” and looking forward to it. Mickey Rourke looks so badass!

There it is. The new “Iron Man 2” teaser poster. While I like the first Iron Man movie a lot, I’m also looking forward to the next one. Only thing though, this poster is kind of silly. In fact, the poster is kind of gay. Notice how War Machine and Iron Man are standing ass to ass, facing away from each other. It might make families uncomfortable.

“Iron Man 2” is sounding good so far. Hopefully, it will be better than the first.

Sam L.  Jackson has ended his feud with Marvel, and signed a deal to reprise his role as Nick Fury in “Iron Man 2”. Jackson has also signed a huge deal to star as the same character in a few other Marvel movies such as, “Thor”, and “Captain America”. Jackson had a feud with Marvel over payments, sounds like Jackson was disgusted that he was offered very little pay for the sequel when the first “Iron Man” made millions. Seems like Marvel resolved things for him to make things better at his request.

Great news, that he’s back on. I enjoyed “Iron Man”, but it’s not the best Marvel movie ever. I hope the sequel will improve.

Actor Tim Robbins is rumoured to be casted as Howard Stark, Tony Stark’s father in “Iron Man 2”. It’s been said that Tim Robbins will only play a small flashback scene where he brings together “The Avengers” and “Captain America”.

For those who has forgotten who Tim Robbins is, he has starred in movies such as “The Shawshank Redemption”, “Antitrust”, “Mystic River”, “War of the Worlds”, etc.

Lets hope this rumour is true. Tim Robbins is a brilliant actor and he would make a good cast addition to the “Iron Man” series.