There’s been a lot of live action versions of Disney classics lately and there will be many more up ahead. So far the ones that I know of are “Alice In Wonderland” by Tim Burton and the “Cinderella” live action film. There are many others coming like “The Jungle Book”, “The Little Mermaid”, “Beauty & The Beast”, etc.

I don’t care for all the other live action Disney films but the live action version of “Pinocchio” actually intrigues me. I’m all for it ’cause I’m a huge fan of the animated classic of “Pinocchio”. I’ve always loved that film since I was a kid and still love it now.

I love the idea of Ron Howard taking over ’cause he is one talented film maker. He’s made a lot of great movies. I think he’ll do a great job at this.

They’ll have to start casting for the other characters now. Who are they gonna get for “Pinocchio” himself? They’re gonna have to get a child actor for that role for sure. They’re also gonna have to cast somebody for Stromboli, the Blue Fairy, Jiminy Cricket, Honest John, etc. If the characters are still gonna be animals then they might have to be CGI characters especially Jiminy and Honest John.

I’d say get John Goodman for Stromboli. I’d say get Charlize Theron for the Blue Fairy.

I’m pretty sure Ron Howard would make the whale chase scene pretty epic and will make it a thrill ride. Can’t wait!

Sam Raimi is finally ready to start filming, “Oz: The Great and Powerful”. The former, “Spiderman” director has already let Disney know that he’s ready to film it very soon. They still hope Robert Downey Jr., will be up for the leading role as the Wizard and it’s looking like Downey will be up for the role.  See the article here at, Deadline.

Hmmmm, I still wonder if Sam’s take on “Wizard of Oz” will be dark or will it be a happy film for children or a little bit of both. There’s gotta be a reason why Disney wanted Sam Raimi for this ’cause maybe there is a lot of dark and horror fiction related material in the script?

At least the “Inferno” film makers still support and respect, Lindsay Lohan, they are still not firing her because of her drug addiction. That’s the way to do it. Still support drug addicts. Like they said, they already worked with Robert Downey Jr., the “Iron Man” and “Sherlock Holmes” star. Downey Jr. had a long history of drug problems and he even went to prison for it. Downey Jr.’s film career was almost destroyed because of his problems, but he went to rehab, got clean, and now he’s a big movie star again.

The same can happen to Lindsay. It took a long time for Downey to clean up his act as it didn’t happen over night for him.

People might find it weird that the “Inferno” film makers still support Lindsay, but in all honesty, it’s a good thing to do is to support people with problems. Drug addicts need all the support they can get. Why should you not hate on drug addicts? Because it would drive them to depression, maybe even suicide, etc. You get the drill. Drug addicts need support so they can get inspired to get clean.

Keep in mind that Downey’s problems were similar to Lindsay’s back in his day but Downey’s were ten times worse. He tried to get clean in the past, went back to rehab, found himself doing drugs again and today he’s clean for good. The public shouldn’t hate Lindsay as they need to support her. Drug addicts needs to stay happy as possible during these hard times. 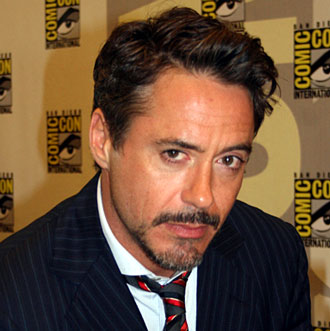 Walt Disney studios wanted him, they GOT HIM! Well, look like Sam Raimi says yes, to the “Wizard of Oz” prequel after all ’cause he just signed his name on the contract, making it official.

Disney is in talks with Robert Downey Jr. to play, the Wizard of Oz, who was originally played by Frank Morgan. The film will be strictly about Oz. It will tell the story of how Oz landed in that area where Dorothy once visited, and how he became  a Wizard, and all that.

I’m sure Sam Raimi will talk to us more about his idea for the film. Will we see some of the original characters back? Definitely not Dorothy ’cause like I said it wouldn’t work. Maybe the return of the Wicked Witch of the West too? Will we see the return of the dancing and singing, Munchkins? Will the film be dark? Will it be family friendly for the kids? Lots of questions that need to be answered, Mr. Raimi! I’m sure will get answered soon.

Bruce Campbell, I’m sure will be involved with the film. Maybe he’ll have some kind of role in it, too? Hopefully. Sam and Bruce have been best friends for years. Bruce had a cameo role in almost every Sam Raimi flick.

Anyway, looking forward to this project ’cause this is sounding very interesting to me already!

The cast was great. I like Robert Downey, Mickey Rourke, Scarlett Johannsen, Samuel L. Jackson, Don Cheadle, Garry Shandling, Sam Rockwell, etc. but even they couldn’t save this movie. It seemed that Jon Favreau hogged up most of the screen time than anybody else in this film which is what annoyed me the most. I absolutely loved the first “Iron Man” film, it was a brilliant film but I think Favreau just ruined the series. The acting was bad, writing was bad, terrible filming, etc. I can go on. Mickey Rourke’s villain charactter, Whiplash was very cool, but he wasn’t used much in the film. There was too much story, not enough action. When you see an Iron Man movie, you want to see a lot of action, I felt this movie failed to have that. This is the worst movie I’ve seen of 2010 so far. It’s nothing I would watch again.

It’s Ac/Dc and Iron Man in one video. Shoot to Thrill! And plenty of “Iron Man 2” footage. I’m sold to “Iron Man 2” and looking forward to it. Mickey Rourke looks so badass!

Today I just saw the movie, “Sherlock Holmes”, and here is my review:

Plot/Synopsis: The film is taken place in London during the 1800’s just like the original Sherlock Holmes stories by Arthur Conan Doyle. It is actually the year 1891 in the film. Serial killer, Lord Blackwood who is also a sorcerer is caught and arrested. He was also executed by being hanged. Somehow Lord Blackwood is still alive and escaped from his grave. Holmes and his partner, Watson (who is played by the great Jude Law), were asked by law enforcement to help track down Blackwood. Holmes discovered that Blackwood has mysterious powers by learning about his occult symbols that were drawn in his prison cell. In the film, Holmes teams up with Irene Watson to help find a red haired midget who is missing. They end up finding the midget inside Blackwood’s coffin, which is a sign that Blackwood has escaped. Holmes and Watson must catch Blackwood to have him arrested again before Blackwood kills more people.

Yes, from the trailers of the film, may seem kind of silly with Sherlock being a womanizer and those funny bed scenes with Irene Adams. Well, that’s how Sherlock Holmes was in the original stories by Doyle. Downey Jr., smoked a pipe like Holmes, he was a wrestler/fighter, like Holmes, the Holmes character even disguises himself a lot. Everything stayed true to the original character. I thought the writing was really good. The cinematography did a great job making the film give it a British feel. Guy Ritchie was the only guy that can do that.

I have no complaints with the film at all. To those out there that thinks the movie looks no good, just doesn’t understand Guy Ritchie’s vision of things. He’s one of the best film makers in Hollywood and one of my favorite directors. I thought Ritchie was the perfect choice to do a Holmes movie. I hope Ritchie stays with it and continues to do more sequels. “Sherlock Holmes” movie is definitely not Oscar worthy for anything, except maybe it does deserve an award for “Best Costume Design” that’s about it. It was still an entertaining movie and I liked it a lot. Bring on the sequel, Guy!

First, Spielberg is no longer doing “Old Boy” with Will Smith. Next, Spielberg pulls out of directing the “Harvey” remake after spending about a year putting the project together. He was trying to find the film’s leading star that Jimmy Stewart once played from the original.

Spielberg tried asking Tom Hanks to star in the leading role but Tom wanted no part in it at all. It’s either Tom didn’t like the idea of remaking the film or he isn’t willing to play any of Jimmy Stewart’s characters or a little bit of both. Spielberg’s second choice was Robert Downey Jr., but even Robert knows the project sucks too. Robert begged for re-writes of the script but the studios wouldn’t take his idea. This is what made Spielberg drop out of the project for good.

Not only hollywood studios are sometimes difficult on Spielberg, even the actors can be too.

It’s really quite simple folks, actors and actresses will not agree to star in a film, no matter how iconic of a director he is. The script must be good enough for the cast to agree to it.

I’m tired of Spielberg getting on the sequels and remakes bandwagon. I know he can do something original.

There it is. The new “Iron Man 2” teaser poster. While I like the first Iron Man movie a lot, I’m also looking forward to the next one. Only thing though, this poster is kind of silly. In fact, the poster is kind of gay. Notice how War Machine and Iron Man are standing ass to ass, facing away from each other. It might make families uncomfortable.

For many years now, Sylvester Stallone has been talking about writing/directing an Edgar Allen Poe biopic film simply titled, “Poe”. Stallone is not going to star in it, he’s just writing/directing. Could Stallone’s “Poe” be next after, “The Expendables”? That’s what Robert Downey Jr.’s saying.

Robert doesn’t say whether or not he’s playing Edgar Allen Poe, but all he’s said was he read the script, so sounds like Sly finalized the script for “Poe”.

I hope, “Poe” will be Sly’s next movie after, “The Expendables”. If Sly does “Poe” next, it has potential to be Oscar worthy. I can see Robert playing Edgar Allen Poe and it could be great acting if he’s casted. It be nice to see Sly back in the Oscars, and “Poe” could be a perfect opportunity for an Oscar nod for Best Director/Best Picture if Sly makes the film right which I’m sure he will.