I don’t know if I like Simon’s idea of this or not. I used to watch the Betty Boop cartoons when I was a kid. Simon Cowell brought us “The Lego Movie” which starred Will Ferrell and the film was a major hit. Admittedly, I did see “The Lego Movie” and I honestly, wasn’t all that crazy about it.

Simon is planning a live action Betty Boop movie but it will be a musical. He says that the music is gonna be current which is probably gonna end up being pop, r&b and rap kind of stuff.

Now, you can predict what actress he’s gonna get for Betty. I wouldn’t be surprised if he’s going for a former American Idol winner like maybe Kelly Clarkson or Fantasia. Maybe somebody from X-Factor.

Of course, I wouldn’t be surprised if he gets somebody like Beyonce or Rihanna. Will they get a black actress/singer for Betty? They did that with the “Annie” remake.

I’m skeptical of this one but if he picks a good actress for Betty, maybe I’ll give it a chance.

So I watched the webcast earlier this afternoon on the A.I. website. Went on there and there was no sound through like half of it. Just proves that American Idol fucking sucks. They promote this press conference, heavily. So many people get on there and there is no sound. WTF? Losers!

Would J-Lo and Steven Tyler help the American Idol ratings for next season? No. The show would simply flop, simply because of no Simon Cowell. The show can’t be successful without him. They’ll tank, trust me. I once had so much respect for Aerosmith, back in the 70’s and early 80’s. Aerosmith became a joke when they became too mainstream in the 90’s…but they came back and I started respecting the band again when they released, “Honkin’ On Bobo”, (an album full of blues covers) ’cause that was a good album that I actually enjoyed. I think the only reason Steven agreed to do Idol, is because he has a solo album coming out soon and he figure the show will help plug him the album. Look at J-Lo in the picture, she doesn’t look good. I can’t stand J-Lo, she’s not hot and just an annoying woman.

Even if I hate American Idol, I’ll watch the next season for a little bit, just to see how Steven Tyler does. I tell you right now that this will mess up Aerosmith’s career. Steven went on the press conference and accused the rest of the band being jealous of him when Joe Perry slammed him for doing the show. Um, no Steven, no one is jealous of anyone here. The reason Joe Perry slammed you because he wants you to concentrate on Aerosmith where you truly belong, not being involved with some stupid karaoke contest.

Like I said, no matter who takes over Simon, the show can’t be done without him. Simon created a legacy with the show. No one wants to see the show without him, no matter who’s the new judge. Hopefully Steven’s job on American Idol won’t last long. I’m sure he’ll end up drinking and doing pills again that will force him to get off the show at some point, just give it time.

So two new American Idol judges will be announced this coming Wednesday. We all know Jennifer Lopez is going to be one of them. Even though Steven Tyler kept reportedly saying he’s confirmed, there hasn’t been anything official on Steven yet. I don’t know if Steven is going to be the judge, because I think Joe Perry and the guys in Aerosmith are trying to talk him out of it. Why? Because if Steven joins American Idol, that would take his time away from, Aerosmith. I’m pretty sure Steven’s not going to be judge, 100% sure of it. It will be someone else instead of Steven. If Steven was signed as American Idol judge, it would have already been announced earlier this week. Steven needs to concentrate on Aerosmith, that’s where he belongs. A.I. is not for Steven, that’s not where he needs to be.

If I’m wrong that Steven is going to be announced as judge Wednesday, then my bad, but I’m pretty sure I’m right on this too. If it is Steven, I would never support him and Aerosmith again. Seriously.

Out of all names picked to replace Simon Cowell: Howard Stern, Conan O’ Brien, Perez Hilton and many others…look like American Idol/Fox is getting very close to finding their guy. Who is it? That’s right. It’s Chris Isaak! A singer/songwriter that is known to being similar to Elvis Presley and singing like Roy Orbison. He did songs like “Wicked Game” and “Baby Did a Bad Bad Thing”. Chris is also a film actor and has his own show, “The Chris Isaak Show”.

I hate American Idol, but this is actually a good decision. Chris is a very talented songwriter, I enjoy his music. If you’ve seen Chris’s interviews, he’s always been brutally honest and he is a kind of a dick (I meant that in a good way). I’d say go for Chris. I would watch American Idol again if he is hired. He would be entertaining. 🙂 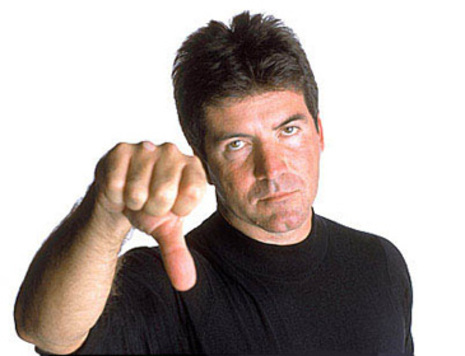 When American Idol first started in 2002, Simon Cowell started some controversy after he started giving singers some very negative critiques. Simon brought American Idol to what it is today. He was the one who brought the ratings up for the show . People watch the show because of him, ’cause they like a good badguy. In my opinion, I don’t see Simon as a badguy judge. I see him as an easy going guy who is honest about everything. People get mad at him ’cause they can’t the truth.

What would American Idol be like without Simon Cowell? The show is going to fail. Period. I predict next season, ratings will be very low. The lower the ratings get, FOX would probably cancel it. No matter who takes over Simon Cowell, no other judge is in his league.

I used to watch “American Idol”, I saw the first couple of seasons, then I quit on season 4 I think. As usual American Idol is still boring, even this year. The only talented singer I was hoping to win it this year was that Crystal Bowersox chick. She actually has the talent, plus that last name, Bowersox is so fuckin’ cool. She’s hot and a hippy chick. Even though she didn’t win, she will have a huge career up ahead anyways.

Back to Simon, it’s going to be weird watching “American Idol” without him. You will never get used to watching the show with him being gone. Simon is an inspirational guy. Everyone should be thanking him.

Now this one is even better than Perez Hilton! If A.I. hires Noel to be judge, I would definitely watch for sure! If you read Noel Gallagher’s interviews through the internet, music magazines, the radio, etc. you would know for sure that Noel is brutally honest with music. Noel is rude and crude. When he thinks music sucks, he’s not afraid to say it even if it’s really harsh and mean, he’ll be open about it. Only problem is though, Noel swears and cusses a lot. Noel will say things like, “that’s fucking shit” and all that. That’s him, it’s his dark sense of humor. So, A.I. would definitely have to be careful with him ’cause Noel wouldn’t help himself but say something very offensive that’s too bad for TV. I don’t take what Noel says seriously ’cause I find him a funny guy myself. He’s another good choice.

Plus, it’ll be a great opportunity for Noel Gallagher to give a plug to his upcoming solo career that he has planned. He could become a well known solo musician just by being a judge for, A.I. and I think this is a good idea for Noel.

Perez Hilton spoke out that he is dying to be Simon Cowell’s replacement on “American Idol”. Well guess what, folks? Simon Cowell likes it and actually agrees with it. Simon says, no one on Idol has reached out to Howard Stern yet. Simon thinks Howard doesn’t have the musical experience enough to be a judge, anyways.

As long as Simon wants Perez, A.I. will probably end up getting him. As much I don’t like Perez Hilton, he would be an entertaining judge since he is the king of controversy of all media. I’d say go for him. The “A.I”. audiences would hate Perez worse than Simon and I can see the audience giving Perez very strong boos.

Simon also says he wants Lady Gaga to be the guest judge toward the end of the season before he goes out.