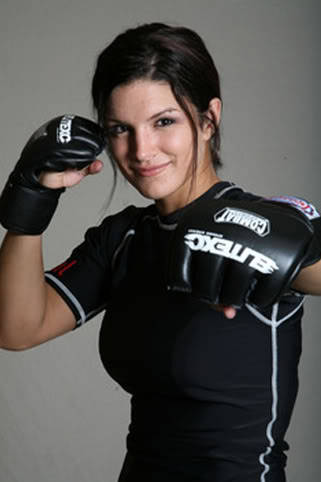 After the big success, of Steven Soderbergh’s action flick, “Haywire”, which starred Strikeforce fighter, Gina Carano, she gets another big action movie role. She will next star in a film called, “In the Blood”, which will be directed by, John Stockwell. This film is supposed to be similar to the Liam Neeson film, “Taken”. The plot will be about her character vacationing in the Caribbean with her husband, then he is kidnapped and murdered. She is out to pursue those who is responsible. Definitely sounds like another revenge movie to me!

I really liked “Haywire”, so hopefully this movie will be much better. I hope they make her even sexier in this movie and hope we get a nude scene. Is Gina giving up cage fighting in MMA and doing movies full time now? She is a pretty hot lady, I know that!

The Steven Soderbergh directed action movie, “Haywire”, which stars Strikeforce fighter, Gina Carano is now online. The movie looks great. I’m a big fan of Steven Soderbergh movies. He was the one who did the Oceans trilogy, “Traffic”, and other films. “Haywire” looks to be an action packed ride. I like female action hero’s, and we need more of them.

I’m sure Strikeforce events on Showtime, will be promoting this movie pretty heavily.

Well, once again, it looks like Brock Lesnar is about to make another UFC comeback. Is this Lesnar’s 2nd or 3rd comeback? Anyway, I lost count.

Lesnar is set to go against, Alistair Overeem, on Dec. 30th in Las Vegas.

More on it, here.

I never watched Strikeforce, but I heard a lot about, the Reem. I hear he’s a monster of a fighter and he’s a beast. While I do like Brock Lesnar, I’m rooting for the Reem on this one. Brock is just a wrestler and brawler, the Reem has more martial arts experience that includes kickboxing. Could Brock actually win again? Note sure, Brock lost miserably to Cain Velasquez the last time. I’m actually looking forward to this fight.

Dave Batista’s MMA dream is dead? Not yet. Even though his “Strikeforce” deal is never happening, he is still doing whatever it takes to fight in the MMA. So to keep his dream alive, he just opened up his own MMA gym. He just opened an MMA training gym in Tampa, Florida called, “Gracie Fighter Jiu Jitsu”.

His “Strikeforce” dream maybe dead, but do you think Dave may have a chance at UFC??? Dave would certainly be headliner material in UFC. I can definitely see a Dave Batista vs. Brock Lesnar in a headlining UFC fight in the future for sure.

Much respect for Dave for going after his dream. If one door closes on a dream, more doors will open for him up ahead!

Dana White announces the huge shocking news that his company, Zuffa, has officially purchased, “Strikeforce“. The fighting company that is shown only on the, Showtime, channel.

Seems like Zuffa and Dana White wants to expand their empire. What are they after next? I have a feeling that Zuffa will buy, Bellator, soon. Wouldn’t surprise me and shouldn’t surprise you either.

My next videoblog, I have came up with a topic of “Women Fighting In the UFC”. I would talk about more in detail why I think Dana is wrong and why women should be allowed UFC contracts to compete. I need to do a little research first. I don’t know much about women fighting in MMA since I don’t watch it too much but I have seen women fight in MMA before, and it’s pretty interesting in my opinion. Honestly, I think women are more dedicated and talented fighters than men are. A lot of men fighters are so boring. Women seem to make the fights more entertaining. I’m going to watch women MMA fights in youtube this weekend and then I”ll make the videoblog. It’ll come this weekend. I’m going to say that what the UFC is doing is discrimination.

I’m looking at UFC/MMA  forums and blogs about this, and man, it’s amazing how hateful men are about women fighting in MMA. Why do women fight? Because they love the sport just as much as the men do. Women love to hurt people, they like to do that for a living. Plus, most importantly, I’m 100% sure that women want to compete in UFC just like the men do. I’m pretty sure it’s perfectly legal for women to fight in the UFC. It’s just the boss’s decision, period.

UFC having their very first female fight would make history. They should make it happen. They will someday. Maybe Dana will one day change his mind. I doubt it though.

Come on now. If women can do Strikeforce and other MMA companies, then they should be allowed to do UFC. I would love to see Gina compete in UFC. It would certainly help PPV buy rates. Why do Dana have to be so discriminatory against women? I do like UFC and all, but I don’t like Dana. He’s an asshole and a selfish business man just like, Vince McMahon.

Former WWE star, Dave Batista, started some media controversy by telling TMZ that he has been signed with the MMA and maybe going to Strikeforce ppv events.

He was asked if he would fight that Fedor Emielenko (SP? Sorry, his last name is always hard to SPELL!) but Batista laughs and says, “I want nothing to do with that dude”. Come on Dave. Scared of Fedor, are ya?

I looked at reports and they say Dave haven’t yet been signed to MMA. He has a tight movie schedule and he’s strict on payments if he wants to join the MMA, so his deal with them stalled.

What do you think? Do you think Dave has what it takes to do real fighting in MMA or in UFC? I mean, just because Dave is a big guy doesn’t mean he can fight  good. We all thought Brock Lesnar was going to suck because he was a WWE guy too but Brock proved us wrong that he doesn’t suck at real fighting, but who knows, maybe Dave does have the skills and the talent to fight for real. Maybe he can prove us wrong too? We were surprised by Brock Lesnar, maybe Dave can surprise us. People think real fighting will kill Dave, but don’t judge the book by it’s cover.

If you look at Dave, I’m pretty sure he can throw some pretty brutal punches and if Dave does a takedown, it’ll make your head spin. Don’t ever think that he doesn’t have what it takes. If Dave is serious of fighting for real, if he does good in MMA, maybe he’ll be on his way to UFC to the big time. Wouldn’t it be kind of cool to see Dave Batista vs. Brock Lesnar at UFC? Dave and Brock already know each other, and yes. The two have wrestled each other many times before. They’ve never wrestled in the WWE against each other, but they wrestled each other at the Ohio Valley Wrestling years back.

On a serious note, I doubt Dave has been signed to MMA. I think he’s being an egotist, and delusional. He might be just joking around as his way of playing with TmZ for a little bit. Those former wrestlers like to pick on TmZ a lot. Just ask Chris Jericho who’s done it many times. These wrestlers crave for the publicity, that’s what they do it for.

Oh my!!! What a powerful match! Here it is…best woman’s fight I’ve seen in a long time. Enjoy.