Come on, Cpt. Picard… what are you hiding, bro? It must be pretty warm in that closet you’re hiding in, isn’t it?

So Patrick marries Sunny Ozzel in 2013 but he seems to be spending way too much time with Ian McKellen than her.

I question Patrick ’cause I’m a fan of Star Trek TNG and his role in X-Men. Doesn’t mean I’ll turn my back on him if he does happen to be gay, though.

Max Weinberg finally explains why he won’t be doing Conan’s new show on TBS. It has something to do with his health problems, as he just had a massive 12 hour open heart surgery. He already had the surgery right after the “Tonight Show”, Coco’s final appearance. Weinberg plans to live in New Jersey full time and he also plans to drum for Bruce Springsteen and the E Street Band more. He’s currently on a tour with Springsteen right now.

Max Weinberg, E Street Band drummer and longtime sidekick for Conan O’ Brien, Max announced he won’t be going to TBS with Conan. He’s done. No one knows why Max split with Conan. Steven Van Zandt, an E Street Band guitarist, doesn’t even know why either.

Lets hope that all this drama between Conan and NBC didn’t give Max, a headache. Either that, or Max wants to move on to other music opportunities? Maybe he wants to drum for Springsteen full time? Maybe Max has his own side project that he wants to get out there in the music world.

Honestly, I’m kind of glad he’ll be moving on. He’s too talented for TV and he should be drumming for other bands out there. I’m sure Max got big music plans up ahead of him.

Coco is officially moving to cable TV. That would be channel TBS, not FOX. Whew, good thing it is not FOX. I never wanted him to move to FOX ’cause they would treat him worse than NBC. This was a surprising announcement today, that Conan announced this news himself on his twitter.

I can’t wait for the Fall, so I don’t have to get stuck watching Jay Leno!!

Last night on Jay Leno, Slash was the special musical guest for his solo career, with Wolfmother singing for him for the song, “By The Sword” which you can get on Slash’s new solo record, out now! TMZ is the first to notice Slash wearing the “I’m With Coco” pin on his shirt.

I’m sure all the Coco fans like myself, would know that Slash is very good friends with Conan O’ Brien. Slash has appeared on Conan’s show plenty of times in the past. I’m pretty sure Jay noticed the pin on Slash’s shirt right away, I’m sure Jay didn’t pay much attention to it, lol!

Nice to see Slash on Team Coco. A way to piss Jay off!

I also want to hear Slash’s new solo record. I’ll get it from Itunes when I get extra cash. I really liked his new song, “By The Sword”, it’s a really amazing tune and tight. Wolfmother is a great band, I always dug them!

Speaking of Conan O’ Brien, he is having an entertaining feud with teen pop star, Justin Bieber in Twitter. It’s actually funny stuff. Are they enemies or just doing it for a laugh? I vote they are just having fun and fooling around.

Check out Coco’s twitter, he’s all over the kid:

Is this to start up the hype that Justin Bieber could be Conan’s first musical guest when Coco makes his debut on FOX later this year? Could be.

I would admit that Justin Bieber is actually not a bad singer. I actually like that song, “Baby” ft. Ludacris. It’s catchy, and you can actually listen to it. I wouldn’t buy Justin’s album, ever…but I do like that one radio hit, “Baby”. That one song is actually pretty cool. Seriously. 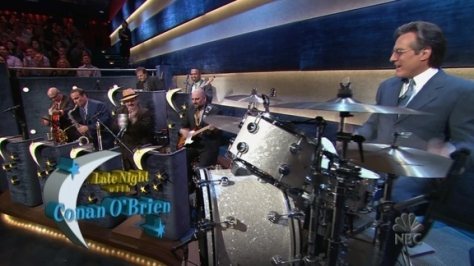 Reports have hit the web that there are rumours that Max Weinberg, Conan’s longtime bandleader could be leaving Conan to fill in Kevin Eubanks when he leaves the “Tonight Show”. Sources claim that Max and Conan O’ Brien haven’t been getting along, having a heated feud against each other behind the scenes.

Before people go thinking that Max Weinberg stabbed Conan in the back, don’t always make assumptions. In my opinion, I don’t think Conan and Max have any bad blood against each other at all. They’ve been friends for years and have known each other for years. If you knew how smart and intelligent Conan is, I don’t think he would get angry at Max leaving him for Jay. Conan would feel happy for Max about it. Besides, this doesn’t mean Max will be leaving Conan for good. He may only be taking over for Kevin Eubanks for just a little while until Kevin returns. Then maybe Max will go back to Conan after that. I don’t believe for a second that they are hating on each other all of a sudden. Stupid gossip sites.