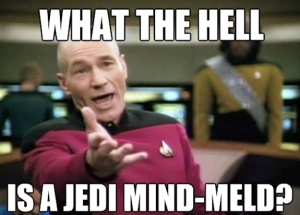 I haven’t been following the President’s “Sequester” and budget cut stuff, ’cause all that is a load of crock, and I’m tired of Obama and his bullshit. He continues to prove himself that he is not qualified for the President’s job. During the press conference, not only that he pissed off the Republicans, he also pissed off the Star Wars and Star Trek community by saying this: ““Even though most people agree… I’m presenting a fair deal, the fact that they don’t take it means that I should somehow do a Jedi mind-meld with these folks and convince them to do what’s right,” Read more about it, here.

I know he didn’t mean it, and it was a mistake, since he wasn’t reading off a teleprompter but that just shows that he is crap at speaking. He maybe good at reading, but take the teleprompter away from him, he is horrible and you can’t understand a word he’s saying.

I think what he really meant was that he was referring to, “Vulcan Mind Meld“, somehow he thought it was a Star Wars thing. To those who aren’t into Star Trek that much, if you don’t know what a mind meld is, it’s a power that is used for Vulcan’s only. You know how when Spock goes up to somebody and puts his hand on someone’s face? That’s a mind meld. It’s a power to exchange people’s thoughts. I understand Obama’s point bringing Mind Meld into this, but bringing Jedi into it by mistake will just get him in trouble.

Plus, what he said about Republicans is even more offensive. He wants the Republicans to side with him and we shouldn’t have to. It should be our right.

Obama’s a piece of shit.

If you have an IMAX movie theater nearby, you may get the chance to see the trailer of the next Star Trek movie directed by JJ Abrams, “Star Trek Into Darkness” in Imax 3D. They will also show the first 9 minutes of the film. If they are willing to show the first 9 minutes of the film, there’s gotta be something serious, they want to show off. Maybe this will be the confirmation, whether or not Khan will be the main villain? Anyhow, I’m sure somebody will bootleg the footage with an Iphone or something, so it’ll land on youtube the day after.

I’m a huge Star Trek fan, a Trekkie as some of you know. The Trek shows I mostly liked was the original, TNG, and Voyager. I didn’t really care for “Deep Space 9” or “Enterprise” but maybe I’ll re-watch them on Netflix soon. I want to re-watch all Star Trek series on Netflix soon anyway. I already re-watched the original Star Trek on there. I’ll start re-watching the Next Generation after I catch up with “Sons of Anarchy”.

Back to Star Trek, I wish they would reunite the Next Generation cast and do another film but I don’t see that happening anytime soon, sadly. The TNG cast deserve to go out with one last great film. Something better than, “Star Trek: Nemesis” which was alright but nothing special.

Last night on Netflix, I just finished watching “Season 1” of the original Star Trek series. I have watched the original series too many times as a kid, I just haven’t seen it in a long while, so it’s nice to start re-watching it. I’m a Trekkie. Proud of it and not ashamed to be a die-hard of this franchise. Over the years, people would bash Star Trek. A lot of people said that Star Trek is boring. I don’t think Star Trek is boring. I think the stories are pretty masterful and intelligent. I think people have a hard time getting into Trek ’cause they look at it like it’s more of a “drama” or “soap opera” mixed with “science fiction”. I also think people don’t like Star Trek ’cause the science is more detailed and they don’t understand it.

Don’t get me wrong, there are things I don’t like about Trek. For example, I wasn’t a fan of “Deep Space Nine”, “Enterprise” with Scott Bakula, and there were a few Star Trek movies I didn’t like. I loved most of the Star Trek movies except for, “Star Trek V: The Final Frontier”, “Star Trek: Insurrection”, and “Star Trek: Nemesis”.

I’m a fan of the original Trek series, I loved The Next Generation, and Voyager was good too. I plan to re-watch all those shows on Netflix. It’s great that Paramount gave Netflix the permission to stream all the series ’cause I was going to start collecting the series on DVD. Don’t have to now. The picture and sound is just as good on Netflix.

A man named, Tony Alleyne, who is from the UK, is a big time, Star Trek, geek. Yes, he’s a die hard fan. Tony is so obsessed with Star Trek, that he even turned his home into a Starship Enterprise. It took years and lots of money to build. His wife couldn’t stand it, so she divorced him and now she wants to sell the home since she owns it. Since she’s selling the home, Tony has no choice but to destroy all the Star Trek stuff he built in it.

Tony admits he was upset and he plans to rebuild, when he gets his own home.

Read the full story and see photos of the home, here.

In my opinion, his ex-wife is a pretty selfish bitch that couldn’t appreciate his love for, Star Trek. Lessons learned, Tony, never marry a woman who is not a die hard, Trekkie. That would be a pretty cool house to live in, I would go crazy over it, since I’m a Trekkie myself.

If he wants to get married again, then he should find a woman who loves Star Trek as much as he does, that way he would not have to go through this again.

JJ Abrams squashed the news that Benicio Del Toro could be starring as the main villain for “Star Trek” sequel. Benicio dropped over money issues.

Look like Del Toro wanted an extremely high paycheck and the film crew couldn’t afford him. They also denied that he was going to be playing Khan.

The casting for JJ Abrams, “Star Trek” sequel just got even more interesting! First Benicio Del Torro and actress, Alice Eve are both in talks of starring. Here’s the next surprising casting. I’m sure you’ve all seen the Paul Verhoeven epic sci-fi action flick, “Robocop”, starring Peter Weller. Well Peter just got casted for an un-named role in JJ’s “Star Trek” sequel. They don’t even say whether he’s playing a villain or a hero.

Nice! I loved the first, Robocop, movie. Just so you know, Peter has never retired from acting, he’s still working after all this time. He’s just been doing other movies and TV shows over the years. I remember seeing Peter in a role for “Dexter – Season 5”, he was a character named, Stan Liddy.

As for what character that Peter could be playing in “Star Trek”, my guess is that it could be, John Frederick Paxton, in which he played for in two episodes of the TV show, “Star Trek: Enterprise”.

Now that the release date for JJ Abrams Star Trek sequel has been confirmed, they are getting right to work on the casting. First, they are in talks with Benicio Del Toro to star as the main villain, but he hasn’t signed on yet. Actress, Alice Eve is the top choice to play a major female lead, possibly to be Captain Kirk’s love interest?

Keep in mind, that Cpt. Kirk was a big womanizer. So he could get more than one love interest for the next film, lol. I don’t know much about Alice Eve, but she’s a pretty hot lady. Not bad at all.

Today, on the Star Trek website, just confirmed the release date for JJ Abrams, ‘Star Trek” sequel. The film will be hitting theaters on May 17th, 2013.

Plot details are being kept under wraps for now but JJ Abrams is set to return to direct and actor, Benicio Del Toro, is in talks to play the films leading villain.

We don’t know who Benicio will be playing yet, but notice that Benicio’s skin is a little dark, it look like he maybe playing a Klingon character. He also might be playing a young, Khan.

I thought the first Star Trek movie was real good and hopefully the next film will be just as good. I hope William Shatner will get a cameo this time, also.

Wow, I never saw this one coming. Honestly, I thought Zachary Quinto was a straight man. He hid it pretty well. George Takei is probably getting all excited now.

The 80 year old actor, Leonard Nimoy, attended his last “Star Trek” convention in Chicago, for the celebration of the “Star Trek – 45th Anniversary”. Earlier this year, Leonard announced he is retiring from acting. What better ways to make it official at a Star Trek convention, right? Leonard gave a speech to the fans for about an hour and ended the speech by saying his famous catchphrase, “Live long and prosper”, then giving his famous Spock hand signal.

While most people know Leonard as Spock, he has done other things in his career other than the Spock role. He is a film director himself, a book author, and he’s even had a short music career of his own.

As a big Star Trek junkie myself, I wish I could have been at that Star Trek convention to see Leonard’s speech. He is a very talented and hard working man, he always got my respect. It’s understandable why he wants to retire from everything, since he’s getting old.

I wonder how much longer, William Shatner  is going to keep working for his career? The Shat will have to hang it up at some point as well because he is getting close to Leonard’s age.

Thanks for everything, Leonard!