Superman is over hyped for a lot of reasons. First of all, the character means so much to so many people — including me. Secondly, the character just rules and he is the king of all superheroes. I loved Superman ever since I was a kid and still love him now. Watched all the Superman movies over the years, the George Reeves TV show, and all the Max Fleischer cartoons. Of course, I read a lot of comics as well.

What mattered to people the most was the Superman films; most notably, the films with Christopher Reeve who helped made the character more iconic. Chris Reeve will always be the best Superman of them all. Nobody will be able to top him ever. Not even Henry Cavill or Brandon Routh. I thought “Superman: The Movie” and “Superman II” were both amazing films but “III” was pretty good — “The Quest For Peace” was garbage. Then comes “Superman: Returns” in which Bryan Singer directed; that film was okay but needed a lot of improvements and the script was a mess.

Here comes the new Superman flick, “Man of Steel”, directed by Zack Snyder and produced by Christopher Nolan. The trailer was released this week to help celebrate the 75 years of Superman. I can’t wait for, “Man Of Steel”. I’m sure it will be a Superman flick that will make all of us fanboys happy. 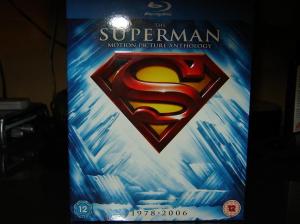 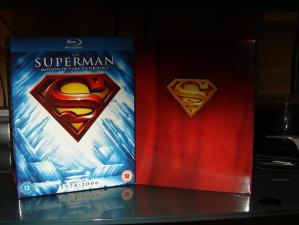 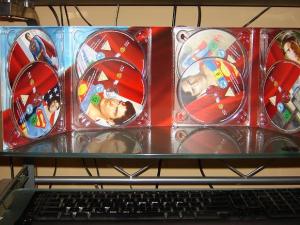 I am now the proud owner of the “Superman Motion Picture Anthology” Blu Ray set! I’m so psyched to have this! You betcha, I’m going to start watching this later today, probably this evening. I’ll start with “Superman: The Movie” tonight.

This will keep me busy for a long while because there are tons of extra footage on the Blu Rays other than the movies. These discs are loaded with extras. I’m pretty sure I’m going to love this set and pretty sure it’s worth the money.

So this is my first Blu Ray set. I also have plans in buying the Star Wars movies on Blu Ray and the Lord of the Rings Extended Editions. Yes, I am slowly starting a Blu Ray collection as you can see. I don’t get that much Blu Rays ’cause they are obviously overpriced. I’m only going to buy Blu Rays of my favorite movies, so I can make the money’s worth.

I’m such a big Superman fan. Love the character and the stories.

I look through entertainment movie blogs and message board forums talking about the actor choices for the upcoming new, Superman movie. The most popular picks are Brandon Routh and Jon Hamm. Brandon Routh is the most popular choice, of course. Ya know, I thought, “Superman: Returns” was a pretty good movie, but the only thing is, I never cared for Routh as Superman that much.

The reason people want Routh back is because he’s so similar to Christopher Reeve. Plus everyone wants to see Routh in another Superman movie. Honestly, I would prefer Jon Hamm more than Routh. I said before, I don’t want Routh back. I like Jon Hamm, he’s the better choice, I think.

I know I said this quite a bit, but don’t be surprised that it could be neither Brandon Routh or Jon Hamm as Superman. They could go with Leo Dicaprio due to the success of “Inception” like I said before.

So who would I want to play Superman? Honestly, and here is my 2cents. The Superman role should go to an actor who is not a big name star. In other words, the role should really go to an unknown. Christopher Reeve was an unknown when he came in, so was Brandon Routh. All that stuff with Brandon Routh possibly being considered to come back, all that news is from a UK newspaper, “News of the World”, which are tabloids. So I’m not believing that. The role should go to an unknown. I’m sure Chris and Zack would get a guy for Superman, that we’ve never even heard before. So don’t get all excited that they could get a big name superstar for Superman.

There are strong rumours flying around the net that “Mad Men” star, Jon Hamm, could be the next Superman/Clark Kent for Chris Nolan’s “Superman” flick. I never watched the show, “Mad Men”, before, but his character, Don Draper, does seem to have a Clark Kent personality. Then Hamm himself spoke with MTV News kind of hinting that he did get asked to play the role.

My thoughts? Some people may thinks he’s a bit too old for the role, but if I remember correctly, the Supes character was supposed to be aimed for a man in his 30’s – 40’s. It wasn’t really aimed at a young guy. I think Jon Hamm might be a good choice, if this news is true.

I wonder why Nolan is strict on casting for “Superman” and “Batman”. He seems to be keeping quiet on both of them for now. Hopefully Chris will talk soon.

How do you make a “Superman” movie successful? Simply put, it needs to be right. It needs to stay true to the Superman comics and give what the fans want.

In my belief, here is what fans want to see in the upcoming Superman flick that WB’s and Christopher Nolan is planning:

Edit to add: I thought I would add a nice video from the “Superman” cartoon where Superman fights Brainiac. Imagine if there was a live action version of the Brainiac vs. Superman fight scene on the big screen. See how cool Brainiac would be as the next villain.

Warner Bros. and DC Comics has won the legal battle over licensing fees accused by the heirs of Jerome Seigel, “Superman’s” author and creator. It has something to do with money over the TV show “Smallville”. It was also discovered that Warner Bros. owns the rights to the Superman character which DC Comics transfered ownership to.

However, the Seigels vow to fight for full ownership of the Superman character, they aren’t backing down… and they warn they will get full ownership in 2013. Attorney Marc Toberoff said, if Warner Bros. doesn’t start production on the next Superman sequel by 2011, the Seigels will be able to sue to recover their damages.

Warner Bros. will probably continue to defend themselves so they won’t get sued by the Seigels. You can’t take down the movie companies because they are powerful people in the movie industry. I agree that Jerome Siegel deserves full ownership of the Superman character since he created it, but the man is dead…he would want Hollywood to make movies on Superman. I think the Seigels are jealous that the Superman movies make more money than them and that’s what this is all about. Money, money, money.

I thought “Superman: Returns” was a great film. I hope Bryan will come back. Congrats to Warner Bros./DC for winning the battle, for now…