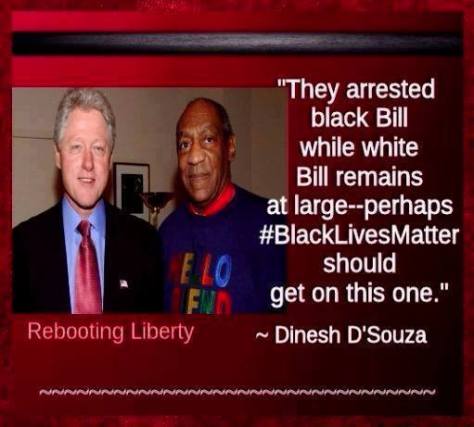 I’m not defending Bill Cosby or anything as I think the guy deserves all the backlash he’s getting but it’s pretty funny how libtards go from defending Trayvon Martin, Michael Brown, Freddie Gray to hating on Bill Cosby all of a sudden.

Aren’t liberals the one who get offended all the time when black people get picked on? Don’t they shout racist at everything? These are the same loser jackasses who call people racist for hating on Barack Obama and now libtards are hating on Bill Cosby. So what gives, huh? Who are the racists now, you idiots.

Not a lot of people in America know that Bill Clinton has a pretty long history of sexual assault. Of course, the mainstream media ignores that stuff. It’s actually great news that Cosby is getting charged but now lets work on getting Slick Willie Bill to get charged too. All it takes is a quick google research to see how many women that Slick Willie assaulted and raped over the years. Slick Willie is no different than Cosby. They would be good drinking buddies. I can see them two sitting at the bar together bragging about the hottest women they raped. lmao

Obama claims he doesn’t have the power to revoke Bill Cosby’s “Medal of Freedom” award that was given to him by George W. As usual, I believe Barack is lying. Presidents have never revoked the Medal of Freedom award in the past before but I think they can do it. Obama won’t do it ’cause he doesn’t want to.

I know the Medal of Honor can be revoked ’cause it has been revoked many times:

Noticing how Obama speaks through this video, he’s sounding a little nervous… a little pausing in between words and his lips are moving so he is probably lying like usual.

It is funny how Obama would comment on things like Cosby’s rape allegations and prison rape, yet he hasn’t said anything about Donald Trump’s comments on illegal immigrants coming into the country to rape women and children.

He also never said one word about the Kate Steinle murder which is no surprise.

Fans of Eddie Murphy were upset that the legendary comedian/actor didn’t have much of an appearance on “SNL 40”. Everyone was hoping that Eddie would be involved in a big skit but instead he got a tiny cameo appearance during the Chevy Chase skit.

Eddie said no. Eddie didn’t want to do it ’cause he didn’t want to disrespect another comedy legend so I take it that Eddie supports Bill Cosby and staying on his side? This is Eddie’s way of defending Bill Cosby? Looks like it. It’s no surprise that Eddie Murphy would do something like this ’cause Eddie has been a Cosby fan & supporter for many years. Listen to Eddie talk about Cosby “positively” during Eddie’s old “RAW” comedy show in the video below.

What Eddie did here was cool. He’s a class act.

Like most people, I looked up to Bill Cosby over the years. He used to be my favorite comedian growing up. I’ve obsessively watched, “The Cosby Show” sitcom and “Fat Albert” cartoon series. I even watched his “Bill Cosby Himself” HBO film many many times. “Leonard Part 6” is also one of my favorite movies of his. Love him or hate him, the guy is a comic genius and legend.

What he’s going through right now is very sad. The fact of the matter is that Bill is innocent until proven guilty. I don’t think he’s a rapist or a sexual predator that the media is trying to make him out to be. In my opinion, I think all of these crazy women who are calling him out are just trying to leech off of his fame. Ya know, they’re just desperate crazy bitches trying to take his spotlight and get their 15 minutes of fame. Those women who are getting all over him are probably a bunch of losers with no life.

I feel bad for celebrities and legendary people in this day and age. Like with the internet, social networking, and gossip sites like TMZ/perez hilton. People will do anything to make celebs look bad to get their fame or money.

Anybody who believes that Cosby is guilty of rape or sexual assault before trial… man, I hope you don’t get called in for jury duty. I think Cosby is innocent. It’s sad that he have to go through all that. He’s an old man and he shouldn’t have to get hurt like that.

Bill Cosby still has my support and I wish him well.

Legendary comic Bill Cosby is set to release a hip hop music album titled “Cosby Narratives Vol 1: State of Emergency” set for release next month in May. It’ll have mixture of genres from rap, jazz, and pop. Cosby says the profanity used in rap music these days is profane and degrading. Cosby revealed about the album that he won’t actually be rapping in it, he’ll be doing “spoken word” over the music.

Just like Bill Shat, Cosby is multi-talented too. We need a Cosby comeback to TV.

Legendary comic Bill Cosby is set to release a hip hop music album titled “Cosby Narratives Vol 1: State of Emergency” set for release next month in May. It’ll have mixture of genres from rap, jazz, and pop. Cosby says the profanity used in rap music these days is profane and degrading. Cosby revealed about the album that he won’t actually be rapping in it, he’ll be doing “spoken word” over the music.

Just like Bill Shat, Cosby is multi-talented too. We need a Cosby comeback to TV.