This is the smartest move that Hollywood has ever done honestly and I actually like it and have no problem with the pushback! MGM and Universal announced today that the newest 007 Bond flick, “No Time To Die” is getting pushed back to April of 2021. It was originally going to be released in Nov. of this year but since the pandemic is still going on and many states across the US still having movie theaters closed, it makes more sense to release this film after this pandemic shit.

If they released this movie in Nov. as scheduled then many Bond fans won’t be able to see it in a theater and it would have a negative impact on box office numbers. Yeah, some states in the US do have movie theaters open now but the film would still lose a lot of money.

The studios really care for the Bond fans that really want to see the next Bond film which is the last film of the Daniel Craig era. They know a lot of people looking forward to the movie since the film getting a lot of buzz and they would feel bad if a lot of fans don’t get to see it ’cause of Covid so they thought it would be better to push it back.

I have no problem with it. I’m all for the pushback. They busted their ass making this film and worked really hard so why release it this year when not many will get to see it, ya know? Makes more sense to release it next year.

I’m a huge 007 fan. Seen all the Bond movies. Seen all 25 films and looking forward to the next one for sure.

Universal Studios was going to release the film but the studio had some distributing difficulties so they’re not gonna release it for whatever reason.

And yes, Paul Reubens is going to reprise his legendary role as Pee Wee, which is good. I can’t see no one else playing Pee Wee but Paul. I remember Paul thinking about having Johnny Depp play Pee Wee and that wouldn’t be right. Paul Reubens is Pee Wee Herman. Nobody else.

The plot and cast of characters are being kept under wraps for the new Pee Wee film but I’m sure we’ll find out soon.

Yeah, I’m a pretty big Pee Wee fan and ain’t ashamed of it. He’s just a very entertaining character and I’m glad he came back.

Universal has been wanting “Jurassic Park 4”, to happen for a long while, but nothing has happened until now. “Jurassic Park III” was released in 2001, so it has been a long while for a new Jurassic Park film. A director by the name of Colin Trevorrow, is set to direct the fourth installment to, “Jurassic Park”. He is best known for directing the film, “Safety Not Guaranteed”. No plot details and no casting has been revealed as of this point.

With today’s technology in filming, you can expect them to take the Jurassic Park franchise to a whole new level. As for what I thought was the best Jurassic Park film was. I thought, “Jurassic Park III” was the best. I thought the first two weren’t that great, honestly, but the third one actually told a great story and it was a pretty thrilling movie too. I’m glad Spielberg is no longer directing these movies ’cause they seem to be good without him.

Spielberg seems to be staying away from family films lately ’cause he’s been doing too much historical drama stuff. Looking forward to seeing what they’re gonna do with Jurassic Park IV.

Some may not like the choice of Angie being the director, but I think it’s perfect. Why? Since the novel is about kinky sex and bondage stuff, Angie is into that. I would think she would know what she’s doing. Do a little research on her past. She took some bondage photos during her modeling days in her earlier career. She used to be a wild woman back then, and I’m sure she still is. 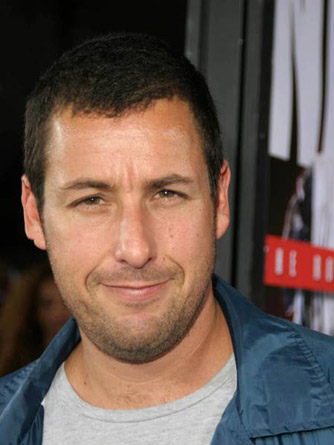 I used to be a big Adam Sandler fan, but I lost interest in the guy because his movie choices as of late has been really weird. I stopped watching Adam Sandler movies after “Punch Drunk Love” in 2002. “Punch Drunk Love” was a great movie, it was his best performance, but everything else he did after that film, what happened to him? I loved all of Adam’s comedies in the 90’s. I loved, “Billy Madison”, “Happy Gilmore”, “The Waterboy”, “Big Daddy” was good, and so was, “Anger Management”. Most of his new movie roles have been garbage lately and I have no interest in seeing, “Jack and Jill”.

He’s still a good guy and funny as hell, but I wish he would get back to choosing good movies again and him agreeing to do, “Candyland”, is even more questionable.

I used to play the “Candyland”, board game a lot when I was a kid. I won’t judge the movie when not seeing the trailer yet though.

Yesterday, the shocking news was announced that Universal has decided to throw Ron Howard’s “Dark Tower” series in the trash. Stephen King, the master of horror himself, was quick to respond to this. He writes to”Entertainment Weekly” saying that he isn’t surprised about Universal not wanting to do it. He also pokes fun at the “Fast and the Furious” series and says that Ron Howard is committed to doing the project. Ron will find a different studio to make the “Dark Tower” movies and TV series.

This is hollywood. It’s a tough business. You’ll run into a lot of big shots who is all about money & ego. I’m still rooting for Warner Bros. or Paramount to pick it up.

Poor Ron Howard! I’m sure he’s pretty upset and heartbroken about this news, but I’m sure another major movie studio will be making it instead. After all the hard work Ron Howard did with the “The Dark Tower” series, Universal has decided the studio is not going forward with the projects. The people behind Universal would not say why they wouldn’t make “The Dark Tower”, but my guess is that it’s way too much money to make. I mean, think about it, with the three films for the big screen and the TV series in between the films, that’s quite a lot. That would cost a fortune, so it’s gotta be about the money.

Don’t worry though, people. As I said above, another major studio will pick it up to make it. It could be possible that Warner Bros. or Paramount Pictures would want it.

A lot of people are giving this series negative feedback because of Akiva Goldsman being the writer (he’s not everyone’s favorite writer), but I’m willing to give this a chance. I’m a huge fan of the Dark Tower books. I’ve read all 7 of them and love them all.

Since Arnold made that tweet on his twitter page that he’s officially coming back to acting, it didn’t take long for Universal to get right to work on, “The Terminator” franchise. It’s no surprise to me that Universal have been waiting for Arnold to get done with his governor stuff so they can do another Terminator movie. Are they hoping that Arnold will finally agree to reprise his role as the T-800? Could the Terminator be Arnie’s first role back in Hollywood?

Universal is interested in Justin Lin to direct the next Terminator flick. The same director who made the last three “Fast and Furious” movies. Universal was going to continue the “Terminator: Salvation” trilogy with Christian Bale and Sam Worthington, but they ended up getting into a bankruptcy war against, Pacificor, so they had to end the new trilogy. So I don’t think that series would ever continue, so does that mean Universal is planning another Terminator re-boot? Start the series over again?

See the interesting report at, Deadline.

I don’t see how the writers will bring the T-800 Arnold model back, but they’ll carefully plan something. I think re-starting the franchise is a better idea. As long as they don’t make it a remake of the first Terminator film, I’m all for a re-boot.

I just want Arnold back as the Terminator. Hopefully he’ll agree to return for the fans. Don’t give me this, “he’s too old” crap. He’s only 63, Sly Stallone is older than him. If Stallone is still doing action movies, why can’t Arnie? I’m  sure Arnie is capable of doing his own stunts for action flicks, still. I’m sure he will do action films. His best friend, Sly, will inspire him to keep the action genre going.

I have a feeling that Tom Hanks will be involved with the “Dark Tower” cast somehow but I know he won’t be playing any of the main characters. What character could Tom play? Well Tom might be able to voice Stuttering Bill, which is a talking robot in the books.

I can see Tom playing Cuthbert Allgood or Alain Johns, one of the original ka-tet members.

Tom will not be playing Roland ’cause the leading character wouldn’t work for Tom. Tom would probably get one of the other characters that’s for sure. Tom would just play a smaller role in the first “Dark Tower” film.

Remember, Tom Hanks is a big Stephen King fan. The two worked closely together when Tom starred in “The Green Mile” in 1999.

Stephen King, the author himself, spoke to “Entertainment Weekly” magazine for his thoughts on Ron Howard and Akiva Goldsmith being in charge for the “Dark Tower” TV series and movies. Stephen reveals he would love to voice the character, Blaine the Mono. For those who don’t know the character Blaine the Mono, it’s a fictional monorail train that talks.

Who is that woman in the picture? Yes, that’s right. It’s Angela Bassett. If I remember correctly, Susannah does appear to be a black woman in the graphic novels.

I do like the choice of Angela Bassett as Susannah though. She seems to fit the character perfectly.