Why is Fox on a rush for that “24” movie? I think it’s because of twitter, possibly. The day that Bin Laden was found and killed, Jack Bauer have been a trending topic on twitter for a long while. People were also talking about Jack Bauer in facebook because of the Bin Laden killing. That’s what made FOX get right to work on the “24” movie. They might go for the Jack Bauer hunting down Bin Laden plot because of that, and I hope they don’t go for it, honestly.

It’s going to be interesting to see what the plot for the “24” film is going to be. I just hope they don’t mess this movie up. I would like it to be a major hit and be successful. I want it to be a really good movie as well.

This is big news for fans of the hit TV show, “24” starring Kiefer Sutherland. “24” is finally coming to the big screen! Is this the studios way of competing with Jason Bourne and James Bond? Seems like it. If legendary TV shows like “Star Trek”, “Sex and the City”, and “X-Files” can successfully come to the big screen, why not, “24”?

I wasn’t that big of a fan of the show but I do like it and did watch it sometimes. I’ll see the film when it hits theaters, sure. With “24” being an action packed TV show, I’m pretty sure they have plans to make the movie version ten times more violent. So be ready for a big action packed movie, folks!

It’s awesome that Kiefer is finally coming back to the big screen in a huge way ’cause he hasn’t had a huge franchise since the two Young Guns movies.

Steven Spielberg took a break from directing movies since “Indiana Jones and the Kingdom of the Crystal Skull” due to working on producing for “Transformers: Revenge of the Fallen” with Michael Bay. Since then, Spielberg kept booking his next projects to direct, he picked several movies like “Adventures of Tin Tin”, the movie about Abraham Lincoln, Will Smith’s “Old Boy” and “Harvey”. Which one did he pick first as his next directorial project? He decided to do “Harvey” which is based on a play and once adapted into a 1950 film that starred Jimmy Stewart.

“Harvey”, is about a man who has an imaginary friend as a 6 foot tall rabbit. Spielberg hasn’t revealed who he would like to have in the leading role but the top candidate could be Tom Hanks. I also think it could be Tom Cruise as well, since Spielberg worked with Cruise twice already.

Ridley Scott and Sigourney Weaver have both been talking to the internet for months now about bringing the “Alien” franchises back to the big screen. It looks like it’s actually happening for real this time! Twentieth Century Fox has greenlighted a prequel to the first “Alien” film, with Ridley Scott officially attached to direct. Ridley Scott was the director of the very first “Alien” film that starred Sigourney Weaver which became the most famous sci-fi/horror film of all times.

The story to the prequel is set before the first movie of course. It will be about a crew of people towing a ship back to planet Earth…then sent to investigate a signal near a planetoid.

Although Sigourney Weaver have spoken to online movie news websites about bringing the “Alien” franchises back, it is not known if she will return as the leading character of Ripley.

Since this is a prequel, they would need a younger actress to play Ripley, and not Sigourney. Makes sense, to me. They can make Sigourney as Ripley as a small cameo, I would think. As long as they don’t make Sigourney’s cameo CGI, I’m all for it.

I wouldn’t support an “Alien” return to the big screen if anybody else directed it, but as long as Ridley is still doing it, I’ll be the first in line to see it in theater! Ridley is one of my favorite film directors. Love the guy’s work.

Like the blog title says, I hope Jason Lee decides to return to hollywood films full time. I prefer him doing that, instead of TV. Jason’s a really good film actor. My favorite movie role Jason Lee has been in was the Cameron Crowe film “Almost Famous”, when he plays the lead singer of that fictional rock band. He’s also really good in ‘Big Trouble”, “Enemy of the State”, and “Stephen King’s Dreamcatcher”. I hope he doesn’t get another TV show and just come back to working on movies.

“My Name Is Earl” started off with a good start first two seasons, then I stopped watching somewhere in the third season.

Woah! Now what a perfect choice for Faceman Peck? HELL YEAH! I’d say get him! Bradley Cooper is dead on with the Faceman looks! Amazing!!!! Lets hope Twentieth Century Fox confirms the news that Bradley is in!!!

Glad that FOX finally started casting for the “A-Team” movie.

I don’t agree with Kurt Russell as Hannibal though. Stupid MTV.

Take a look at Hannibal’s picture from the series:

Take a good look at his face and see what celebrity actor reminds you of? It don’t have to be the same hair color ’cause Hollywood can always change an actor’s hair color to the same as Hannibal’s. The actor has to match his face.

I think the perfect candidate for Hannibal is …. 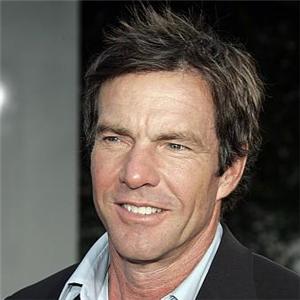 Perfect teeth, the smile is kind of similar… Dennis would look great in that white hair and big cigar in his mouth. He’s my pick.

Twentieth Century Fox are not the only ones upset over the “X-Men Origins: Wolverine” leak…even Hugh Jackman himself is pissed about it. Jackman has some harsh words to say about it and yes, he sounds pissed!

I can’ t blame the guy. He’s the guy that starred the leading role in, he seems pretty excited and psyched about the film, but the leaker ruined it for all of us.

Those that think it’s okay to steal a movie before release date and put it online, needs a reality check too.

Oh my. Twentieth Century Fox’s “X-Men Origins: Wolverine” which is a spin off movie from the “X-Men” series, which Wolverine gets his own movie, already been leaked on the internet. It is not the final version, it is an earlier version with missing footage, different music, etc.

Twentieth Century Fox sent out a statement stating they will take down the person that leaked the movie online for all to download. They have the FBI and MPAA investigating.

I’m no fan of Twentieth Century Fox, but I gotta say, they are doing a good thing here. Piracy and leaking things before release is illegal. If you look at music albums or DVD movies there is an F.B.I. piracy warning on the back of them.

To those think that the leaker who put this movie online before release is an ok thing to do, don’t even understand what copyright means at all. I hope Fox destroy’s this asshole’s life.

I really am looking forward to seeing “X-men Origins: Wolverine” and you can betcha I will see it on May 1st.

Plot/synopsis: A former “Watchmen” superhero is murdered, the murder gets investigated by a new group of superheroes named the “Watchmen”. The film is set in 1985 in which they have something called the “Doomsday Clock” which charts the USA’s tension with the Soviet Union 5 minutes before midnight. The adventure leads to a romance triangle between two superheros over a superhero woman named Silk Spectre (played by Carla Cugino), Silk is in a romance storyline with a man that glows bright blue, named, Dr. Manhatten (played and voiced by Billy Crudup). The “Watchmen” wants to save the world but this romance over Silk kind of gets in the middle of all of it.

Hmmmmmmm, after seeing this piece of crap, I am now wishing that Twentieth Century Fox destroyed this movie during that fued. I was pretty bored throughout the entire thing. Yes, the CGI graphics were pretty impressive but that still couldn’t save the movie. I was expecting a superhero action flick, we got a little bit of that, but it turned out to be a lame love story and soap opera.

This movie was fucking cheesy and goofy as hell. I didn’t like it. Bad writing, bad acting, the costumes of the superheroes looked pretty hilarious.

I thought this was one of the worst movies I’ve seen in a long time. Please, wait for DVD on this one. I wanted an action packed superhero film which what I was expecting to see, but instead we get “Days of Our Lives” mixed in with superhero comics. The first half of the movie was all action packed, the second half, was a cheesy soap opera.

I now feel like a damn idiot pulling for Warner Bros. to win this feud. Although Fox won the feud, I wish they went ahead and destroyed this film because this film was a piece of garbage.

Ah well, it happens, you go to a movie and you end up not liking it at all. There are better movies coming out later this year, so I’m not worried about it. There is still, “X-Men Origins: Wolverine”, J.J. Abrams “Star Trek”, “Terminator: Salvation”, etc. All kinds of great movies coming out this year. Just don’t waste your money on “Watchmen”. Whatever you do.

Walt Disney pictures is out of making Narnia 3, Twentieth Century Fox is in!!! Just a month after Disney pulling out to make “Chronicles of Narnia: Voyage of Dawn Treader”, 20th Century Fox has teamed up with Walden Media to make the third installment. Ben Barnes, Skandar Keynes, and Georgie Henley are set to return in the cast.

More on it here at Variety:

Hope Twentieth Century Fox don’t screw it up and they keep it the original style as the first two films. I love the Narnia series.